Who's in the garden? 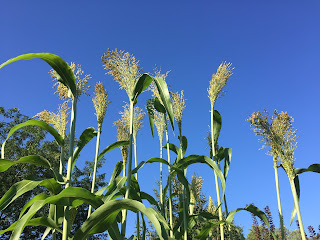 It was that kind of gentle, quiet rustling that makes you think someone is trying to sneak up on you while you've got your head down in the squash plants trying to find those little hidden squashes before they become gigantic baseball bats.

Who was in the garden with me? Raccoons? Surely the raccoons wouldn't be so bold as to steal my corn while I am standing just a few feet from it.  Rabbits? Rabbits wouldn't dare whisk by on their way to a delicious breakfast featuring cabbage from the garden, would they?

Who was in the garden with me?

Well, it turns out it was the broom corn, rustling in the breeze on a cool summer morning.  The rustling was not meant to scare me but to remind me that the broom corn was there. The broom corn told me with each rustle that soon their seeds will ripen and birds will fly in from everywhere to hang on for dear life to those broom stalks while eating those seeds.

The broom corn also rustled a reminder to look up and see how blue and clear the skies are today.

And the broom corn rustled in whispers, telling me the secrets of the garden.

Yes, I am fluent in the rustling language of broom corn.

The rustling also reminded me that I am never alone in my garden. There are raccoons and rabbits, bees and garden spiders. They aren't always there at the same time I'm there, but they visit my garden often enough.

And there are memories in my garden.

When I go out to my garden, the rustling broom corn reminds me I'm always accompanied by memories of my Dad and his tomatoes. I look at my staked tomatoes and know he'd be pleased that I continue to stake my tomatoes in a world that wants to take the easy way out and cage tomatoes.

My grandparents are there, too, reminding me that to harvest is to eat. Not picking is not an option, or at least it shouldn't be considered an option.

I'm never alone in my garden. The broom corn rustles, a rabbit darts away, a bee buzzes by, and behind me gardeners from the past offer encouragement, advice, and reminders.