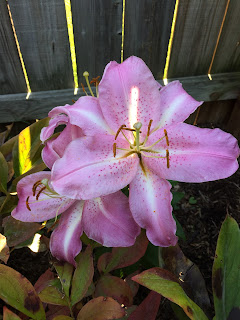 The conundrum was how to do enough clean up to make it look like someone regularly tends this garden without doing all the clean up so there would be something to clean up once they came.

Such was my dilemma when I said "yes" to a request to film a segment on fall garden clean up, in my garden, for a local show called Boomer TV,  put on weekly by the people at IndyBOOMER.

And I agreed to be in the segment.

I received these detailed instructions. "Just be ready to talk about three tips for fall clean up and be ready to demonstrate doing them."

And this little piece of advice. "Ignore the camera".

Do you see my dilemma? My conundrum? I wanted the garden to look decent, but I needed to leave parts of it alone so I could show "cleaning up".

In some ways, it was a dream come true, like having houseguests who tell you in advance not to do any cleaning because the whole reason they are coming is to find out how you clean things up and then watch as you clean.

Of course, those guests assume you aren't some kind of hoarder and your house is more or less in decent shape.

And the people at IndyBOOMER assumed I had some kind of decent garden and it wasn't a big pit of weeds.

In the end, I did do a tiny bit of clean up. I straightened up the patio furniture, tossed out some non-performing potted plants, harvested the potatoes, and rolled up the hose on the hose reel.  Don't judge on that hose reel thing. I know I am not the only one who vows she will roll the hose up on the hose reel after every use and then ends up rolling it up just once at the end of the season before putting it away.

Now this year I will have rolled it up twice.

I also cut the grass and even bagged some of the clippings so I could demonstrate using lawn clippings as mulch. Clever, eh? I didn't think filming me mowing would be that exciting. It would be much more exciting just watching me spread the lawn clippings!

And I was grateful I had finally taken the time to put landscape fabric on the Vegetable Garden Cathedral paths to cover, smother, and annihilate all the weeds because they did some filming of me spreading the lawn clippings on a bed in the cathedral and I'm pretty sure the paths are in the picture. Black fabric paths aren't the prettiest but let's go with the assumption that just like a little black dress is always a good choice when you don't know what to wear, black fabric paths in the garden are always a good choice when you don't know what else to use.

Anyway, I think the filming went fine and I received a nice compliment from the "weekend gardener" who hosts these segments.

If you live in the suburbs and you garden, you know that is a big compliment.

The actual segment won't air until Sunday, September 17th locally on Boomer TV. Eventually, I think it will end up on the Internet. If I like it, I'll post a link to it.

www.thenorthernwestvirginiagardener.blogspot.com said…
I LOVE Boomer TV! Of course I don't get it anymore, so I'll have to check it out on the internet. I know you did great and can't wait to see you.

commonweeder said…
How exciting. And so much good advice - even for people who won't be filmed but for those who are booked to do a demonstration for a garden club or some such.
Sat Sep 09, 08:12:00 AM 2017