A Raccoon Rumspringa Party in My Garden 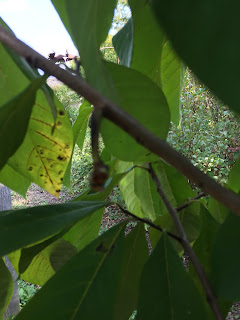 I went out earlier today to check on my pawpaws and they were gone.

Gone. As in not a trace of a pawpaw anywhere. No half eaten fruit. No seeds delicately spit out by whoever ate them. No tracks. No tell-tale scat. Gone.

I assume the raccoons took them. Those hooligans. How could they have discovered my pawpaws? There were only two pawpaws.

Once they found them, they probably had a raccoon rumspringa party and ran off with them.  (Insert terrible bad words here.)

Rumspringa is my new favorite word.  I just heard it the other day. It's an Amish word, describing the period of time when they send teenagers out into the world to experience all that it has to offer before they live out the rest of their lives under the strict rules of the Amish. It's a rite of passage for them and they can choose, once out in the world, not to return to their Amish community.

Apparently, there aren't a lot of rules for rumspringa and some of the Amish teenagers use this time to party, a lot. What's the saying, "There's no party like a rumspringa party?" Actually, I made that saying up. I don't know if there is such a saying.

But now I use the word "rumspringa" rather loosely to describe any party where people, or animals, seem to be letting their hair down and having a good time.

Which is why I think there was some kind of raccoon rumspringa in my garden last night.  Because the pawpaws are gone. I hope whoever ate them enjoyed them.  Otherwise, it wasn't a very good rumspringa.

But why should the Amish and the raccoons have all the fun?

I think some of my friends should go on a retirement rumspringa. They seem a bit afraid to leave the workforce, even though they've saved enough to retire. "What would I do?" "I'd be bored." Honestly, I have not yet met a retired person who was bored. There is so much to do out in the world!

I consider my retirement rumspringa to be permanent. I am not going back to what I did before. Though, with the book, the speaking engagements, the magazine articles... some people would say I'm not as retired as I think I am.

But apparently I don't get to do it with pawpaws.

Because the raccoons on their own personal rumspringa adventure beat me to them.

Next year. Next year, they won't.
fruits humor