'Tis the Season of the Pawpaw 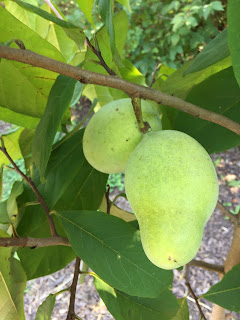 'Tis the season of the Pawpaw and I've been going out every day, sometimes twice a day, to check on the fruit on one of my little pawpaw trees.

What? You've never heard of our native fruit tree, the pawpaw? Asimina triloba.  It's a native tree if you live in the Eastern United States where it can be found in most wooded areas.

Because pawpaws seem so common, once you know what they are, people think they'll just take their trusty shovel out to a woods, dig one up, and take it home to plant in their own garden.

And the tree will die 99 times out of 100. Maybe 100 times out of 100.  For many reasons. Primarily, pawpaws are grove forming trees so those little trees that people dig up are probably connected to mama trees nearby and getting most of their nutrients from those trees.  On their own, they don't have enough roots to survive and they die.

People rave about how good pawpaws taste. Sort of like a banana, they say. I don't know. I've never tasted one. But if those two pawpaws in my garden ripen and I get to them before the squirrels and raccoons do, I'll soon know what they taste like.

I keep checking them every day. I smell them because they are supposed to smell "fruity" when ripe.  I gently tug on them because the ripe fruit supposedly comes off the tree easily. I look at them because I read somewhere that they turn bright yellow when ready to harvest, but I don't know if that is true for all varieties.

Varieties, you ask? On a native fruit tree like the pawpaw? Yes, there are varieties sold by reputable nurseries and you should buy two varieties because pawpaw trees don't self-pollinate.  I have two trees from Stark Bros. Only one had fruit this year, but they are still relatively young trees. This is their third summer.

And Stark Bros. grows them as grafted trees in a special long container so you get a good root system.

Occasionally, you'll find pawpaws at a farmers market in late September but I've never seen them in a grocery store. When ripe, the fruit is quite perishable and only lasts a few days.  That's why I'm checking my pawpaws every day, sometimes twice a day. And as the days go on, I might check them three times a day. I don't want to miss the peak of their ripeness.

I was supposed to be going to Charleston, SC this coming weekend for a GWA: Association of Garden Communicators event but they canceled it because of Hurrican Irma. I was sad they canceled it but now realize that it will take the pressure off my pawpaw watch.  The proverbial silver lining.

Now I'll be here to check on my pawpaws through the weekend, if that's how long it takes the fruit to ripen, way down yonder in the pawpaw patch, by the Vegetable Garden Cathedral.

These are exciting times in the garden, aren't they?