How did we get to "compromise" so quickly? 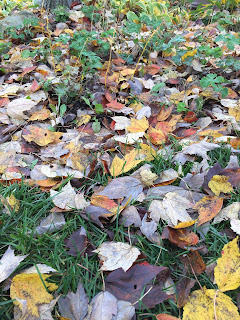 I wonder how we got to "compromise" in the fall garden so quickly?

I blame the unusual summery days of October when warmer than normal temperatures lulled me into believing there was a lot of time before winter.  To keep that sun out of my eyes, I put my head in the proverbial sand and lazed about as though I had endless time to do fall clean up.

Now it is November, and the weather is decidedly seasonal. Cloudy, rainy and cold. Not one bit hospitable for a gardener who wants to savor the moment.

I'm watching all my plans for a slow, methodical, leisurely clean up of the garden get crunched into a fast, chaotic, hurried spit & shine sprint through the garden.

I have to be strategic about fall clean up now. And I'm going to have to make some compromises along the way, all the while wondering how did we get to compromise so quickly?

I won't compromise on spring flowering bulbs, though,  because I did plant most of the ones I bought, but if I was going to compromise, I might throw the bulbs in an old black plastic pot of potting soil and shove that in a cold spot, then bring it out in early spring to add some color in a few spots.

I won't compromise on planting trees and shrubs because this is actually a good time to plant them around here. And they are on sale in many garden centers.

I won't compromise on weed clean up because that's just asking for trouble in the spring.

I'll keep mowing and mulching leaves as weather permits, too, because I like doing that.

I'll probably leave some perennials standing through the winter, but that's actually supposed to be better for the insects that chose to overwinter in and on those stalks.  I guess that's a good compromise to make.

I'll also cover and protect the patio furniture and garden ornaments that would crumble under the first snowfall.  I don't want to waste the good money I spent on those things.

Hmmm... looks like I'm not having to make as many compromises as I thought. Maybe I have more time than I realize?

Yes, plenty of time to do some garden clean up. It's only early November, right?