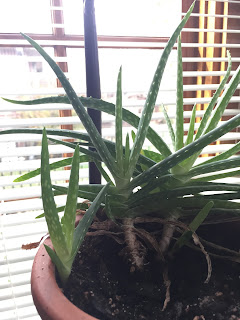 I had a revelation about houseplants the other day and I'm here to tell you that it is the most liberating revelation I've had in quite some time.

I have some really old houseplants in my sunroom.

(Yes, you can say that about most plants, that they originated a long time ago. After all, plants weren't just invented! But can you say they originated with your great-grandmother? I didn't think so.)

I do my best to make sure my aloe plant survives my care.

I also have a night-blooming cereus in my sunroom. My Dad got a start for it back in the 1970's from a woman he and my mom played Bridge with. Even though it is also the world's ugliest houseplant, I keep it because it has been in our family for over 40 years.

I sure don't want to be the one who got rid of the 40-year-old family houseplant, that's for sure.

I also have a pothos vine, which ebbs and flows in its lushness and is currently ebbing more than flowing. But I certainly can't get rid of it because it came from a funeral planter from over 30 years ago. Goodness gracious, that is also an old houseplant. I need to revive it somehow, get it flowing again.

Of course, I also have plenty of houseplants that come and go, sometimes in spite of my best efforts to care for them. Some of them are languishing while sitting next to a flourishing houseplant that received considerably less care. Some are failing because I gave them little care.

Surveying all these houseplants in the sunroom led me to my revelation.

Houseplants don't have to live forever.

Knowing that houseplants don't have to last forever, I'm going to start treating them more like annuals or perhaps short-lived perennials. I'm going to buy them, enjoy them, and if they don't last forever, like the aloe and the cereus and the pothos, that's going to be okay. I'm going to spread them out around the house, like flower arrangements, with less concern for light requirements.

If they do well, great. If not, I can move them back to the sunroom and bring out another plant that seems to be ready to show off its stuff. By spring, I'll be heading outdoors again and plan to take more of the houseplants with me, instead of leaving them in the sunroom to languish. If they die, that's okay.

Houseplants don't have to live forever.

Armed with my new revelation, houseplants don't have to live forever, I'm excited about getting some new houseplants, my new winter annuals!