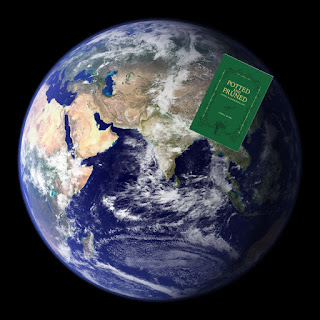 Somewhere on Earth, 2117 -  Lorac was one of the lucky ones. After the great Internet crash of 2116, having access to books and the ability to read gave her a certain advantage over her peers.

Reading had been cut from the school curriculums 50 years earlier after it was determined most of the world's knowledge was available via videos. Why learn to read when you could just listen to knowledge? And writing was also deemed unnecessary.

But Lorac was fortunate because her great aunt, who had been taking care of her ever since her parents had joined a Mars expedition, insisted she learn to read, and not just read on a screen, but by holding books in her hands. She loved doing it, too. There was just something about the printed page that drew her in. Her great aunt had a library with countless books safely hidden away where no one could get to it without her permission. Lorac could read books from her great aunt's library for hours and days and years and never run out of books.

Why did her great aunt have so many books? Simply because she had refused to give in to the magic of tidying up or undertake Swedish death cleaning. She kept her books, and read them, too.

So when the Internet crashed in 2116, and all the videos were wiped out, the only knowledge left was hidden in books. And only those who could read had access to that knowledge.

Fortunately, Lorac's great aunt had hundreds of books on gardening and a little spot in her backyard to grow food in.

One day Lorac was looking at all the books and playing a game she invented to choose which book to read next. She would close her eyes and run her finger across all the spines of the books on a shelf and then randomly stop on a book. She promised herself that whatever book her finger landed on, that would be the book she read next.

It was her great fortune one winter day to have her finger land on a slim green book. She gently took it off the shelf, dusted off the cover and noted the titled: Potted and Pruned: Living a Gardening Life.

She began to read. She giggled a little. She laughed. She smiled. And she fell in love with the idea of learning the long lost art of gardening, of living a gardening life.

She showed the book to her great aunt, who nodded knowingly and with a smile said, "Yes, that is one of my favorite books. It was written by your great-great-great-great aunt who loved to garden. She was wise, too, and knew her knowledge of gardening would last much longer if it was printed on paper and didn't just exist in an electronic format or as something told on a video. That's why she published her writings in actual printed books."

Together Lorac and her great aunt read the book cover to cover, recalling another saying hundreds of years older than even the book. "If you have a garden and a library, you have all that you need."

And with their ability to read, their library, and soon a garden, they lived happily ever after.
SaveSave
humor

Teri said…
This was a refreshing read Carol. The act of pausing and reading is an artform that some no longer appreciate. Thank goodness garden writers find perennial words to keep our readers in the know. Being in the know, helps them grow!
Teri Speight
Http://www.cottageinthecourt.com
Wed Dec 27, 04:58:00 PM 2017

Anonymous said…
I am with you on real books opposed to ebooks. And we have already lost writing letters. I have a sister and a cousin who I write and receive letters.
Wed Dec 27, 05:22:00 PM 2017

MissPat said…
As a retired librarian, I'm with you all the way. A friend gave me a ceramic plaque with that saying on it. It resides on my front door under a "Martha Stewart doesn't live here" sign.
Thu Dec 28, 09:57:00 AM 2017