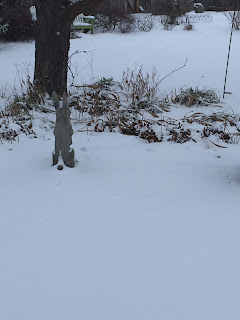 The old rabbit, Seventeen, sat shivering in the snow, waiting for his replacement. He checked his watch. Just a few more minutes and his time in the garden would be over.

As he sat and waited, he reflected back on his year. Oh, there were high expectations for Seventeen, which he knew coming into the year. After all, it was the Carol's first full year of retirement so the gardens should have been their best ever.

And then there was the book.

Had anyone not yet heard of Carol's book, Potted and Pruned: Living a Gardening Life?  Seventeen assumed not. He was going to be forever proud that the book came out in his year.

Out in the garden, Seventeen thought Carol could have done more, especially with weeding.  He made a note to leave instructions with Eighteen to make sure he made her weed earlier and more often.

But  in spite of the weeds, Seventeen thought it was a pretty good year in the garden, overall.  He and Mother Nature had cooperated on the weather front and made sure Carol didn't have too much to complain about, until these last few cold days. Brrrrr... Seventeen planned to hand the cold days over to Eighteen to see if he could do better. No doubt by spring...

Ah, spring. Seventeen smiled at the thought of all the new flower bulbs coming up to bloom in the spring. He had planted well over a thousand more bulbs in the lawn. He knew it would be a sight to see.  And the Vegetable Garden Cathedral? Well, Seventeen wished he'd done a better job of clearing out the beds in the fall, but with snow on the ground, he couldn't do it now.

In mid-thought, Seventeen heard the far off chimes of some church bells beginning to ring in the new year. He stood on his tip toes and looked as far as he could and saw Eighteen heading toward to the garden gate.

"Over here, Eighteen!" he shouted. "I've been waiting for you. Hurry and I'll give you some advice for the new year."

Just then Eighteen sauntered up to the garden gate and startled Seventeen.

"You're not a rabbit!" said Seventeen as he looked straight into the eyes of a squirrel.

"Nope," replied Eighteen. "I'm a squirrel. We have instructions to mix it up for Carol in the new year so they decided to send a squirrel instead of a rabbit."

"Carol's going to be mightily surprised," said Seventeen. "I'd love to stay around and see her face when she sees the likes of you but I've got to go store these memories before they are all forgotten. Just a couple of notes about weeding and oh, yes, there is a new book she's working on. Make sure she gets that out under your watch..."

With that the clock struck the final chime of midnight and Seventeen disappeared into the mist.  Eighteen sauntered into the garden and looked around.

"Orders are to mix it up a bit this year," she said to no one in particular. "So that's exactly what I'm going to do."

And with garden fairies watching from the shadows, she shouted out to all, "Happy New Year from May Dreams Gardens!"
holidays

RobinL said…
I’ve recently finished your book, and I’m pleased to hear there’s another coming. I have a suspicion that I know the theme, but I’ll have to check with the garden fairies to see if I’m correct.
Mon Jan 01, 07:55:00 PM 2018