Seedy and Soddy would like to tell Santa they are sorry 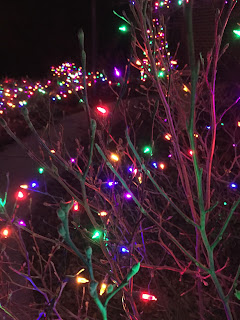 Seedy and Soddy, two young garden fairies, would like to tell Santa they are sorry.

They had been quite bad for quite some time but after a long talk with the right reverend Augustus McGarden—Gus to his friends—they saw the error of their ways and decided to make amends before Santa came on Christmas Eve.

Unless they made amends for their bad behavior, Gus told them that not only would Santa not come and bring them presents, but they would most certainly jeopardize their future plans. And they had future plans.

Seedy was hoping to go to school to learn leaf painting. He thought that would be a good job because he would get most of the summer off and be able to laze around all winter. He had even been secretly practicing, though he once got caught painting a maple leaf red well before it should have been painted.

Soddy wanted to become an apprentice to a bloom opener.  Bloom openers were in high demand and it was not an easily or quickly learned skill. Bloom openers had to know when to open flowers, when to close flowers, and of course, the many techniques for opening various types of flowers.

What had they done that was so bad? Well, as Gus explained, it was one thing to hide Carol's gardening gloves, but the compost bin was a poor choice for the hiding place because it took Carol literally years to find them.

That whole time, Granny Gus McGarden had to watch over those gardening gloves and make sure they didn't keep the composters from coming around. After all, if it is your job to eat old leaves and overgrown zucchini squash and turn it into good compost, do you really want to bite into a gardening glove when you think you are biting into a delicious, moldy old leaf?

And then all summer Seedy and Soddy had been a little too free with the weed seeds. They sowed too much thistle and even got caught with some bindweed seeds which was clearly a violation of the Code of Ethics of Garden Fairies. Clearly.

As every garden fairy knows, when there are too many weeds, it sometimes causes the gardener to lose hope and stop weeding. Then the whole garden becomes a big weedy mess and the garden fairies have to move on to another garden.

So Seedy and Soddy needed to make amends. But how? They both listened intently as Gus provided them with a plan to save themselves, their Christmas and their very futures. He instructed them to keep watch over every Christmas light Carol had put on the trees and shrubs outside and make sure they all stayed lit until after January 1st.

"All of them?" cried Seedy and Soddy in unison.

"All of them," replied Gus.

Seedy and Soddy knew it would be quite the job, requiring both of them to remain vigilant, lest some raccoon or squirrel chew a wire or a bird pull out a bulb. Nonetheless, they took Gus's advice and began to watch over all the Christmas lights.

So far, so good. The lights have all stayed on and with just five days until Christmas, Seedy and Soddy are well on their way to making amends for their bad behavior. It looks like Santa is going to accept their apology and they are back on a most righteous path toward a prosperous future.

And Carol cannot believe that all her outdoor lights are still working, but shhhh... don't tell her why. She has no idea that it is all because Seedy and Soddy were once bad garden fairies who now must make amends.