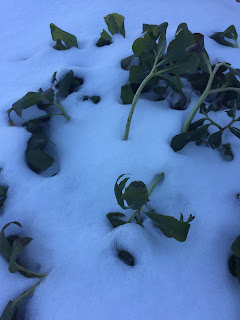 Naturally, during this cold spell, which has included a few too many mornings with temperatures featuring minus signs, I've been thinking about weeding my garden.

I would like to weed my garden now, of course, because I can't with all the snow and cold and frozen ground.

I feel bad for the many weeds I left standing in my garden last fall. I knew the weeds were there. I saw them, I touched them, but yet, I didn't pull them out.

Some questions have no answers, at least according to Dr. Hortfreud.

I did throw some leaves and grass clippings on some of the weedier raised beds in the Vegetable Garden Cathedral hoping they would smother out the weeds that were just starting to stretch their roots and hunker down for the winter.

Yes, of course, I know what I should have done. I know how to garden. I should have pulled some of those weeds, if not all of those weeds before I covered them up.  But it just seemed like such a daunting task. So many weeds, so much ground to cover.

Now in this cold weather, I've imagined myself weeding, weeding, and weeding some more as I gaze out the window at the frozen snow-covered garden. Sometimes, I imagine myself weeding so much that I look down at my hands to see if I got them dirty or if I'm actually holding any weeds.

Alas, my hands are clean and weed free.

Yet, I know what is likely to happen when the weather turns warm and I can finally go out to weed. I will go out and get discouraged by the sheer size of the areas with weeds. I know this is likely to happen because it has happened. Many times. Too many years in a row.

But hope is not lost. Not yet. Not while I still have a garden.

Last night, as I weeded again in my mind, I came up with an idea, a device, to help me weed.

I think this device may even be better than my Pomodoro time management system which I use to convince myself to weed for just 20 - 25 minutes and then I'll take a break.  After the break, I'll weed again for 20 - 25 minutes. Repeat until the garden is weed free, or more likely stop because it seems I'll never finish.

Yes, I think this device will solve my problem of having such large, daunting areas to weed.

Until I come up with a better name, I'm calling my new device The Weed Focuser.

I'm going to nail together four narrow boards to form an 18" square.  Then I'm going to put that square, "the weed focuser", on one of those big beds I need to weed and focus only on weeding in the square.

Now, you are saying, "Fine and dandy, Carol, to use the Weed Focuser where nothing else is planted, but what if you have a planted up area and you need to weed in between plants and you can't set the Weed Focuser down in that area because of all the plants already there?"

Oh, that's an easy problem to solve. I'll also have another set of four narrow boards that aren't nailed together. I'll just place them around a weedy area and then focus on weeding in just that area, working around any plants in that area. While I'm at it, I might also deadhead and fluff up the plants inside the Weed Focuser.

Some people will think I am nuts for coming up with this invention. They will say that the Weed Focuser is just a mind game. Yes, it is just a mind game but if it helps me focus, why not use it?  After all, sometimes you just need something to allow you to feel like you've made progress by breaking a big, overwhelming job it into tiny, achievable tasks so you don't get discouraged.  Eat the elephant one bite at a time, or in my case, weed the garden one 18" inch square at a time.

Perhaps I'll write some inspirational quotes on my Weed Focuser.  Quotes like "every weed pulled is a step to garden nirvana"  "One weed at a time to a weed-free garden." "Take your garden back from the weeds."

Or, my favorite, "Your garden is more than these weeds."

Stay tuned for my report of amazing results this spring.

Jenny said…
Maybe this is what you need!?

Lisa at Greenbow said…
I hate to sound like Debbie Downer here but it will never work. You will become distracted by something, the garden fairies will hide your focus machine and then you won't get anything done. But... I will look forward to your report.
Sat Jan 06, 06:55:00 PM 2018

Gnome girl said…
Yes the Garden Fairies may try to hinder what you have planned but if you would put some Gnomes in your garden they would encourage you to keep at it. They are German you know and hard workers. Mine entertain me all the time and encourage me to keep my garden clean.
Sat Jan 06, 08:22:00 PM 2018

Lee@A Guide to Northeastern Gardening said…
Hmm...I remember a certain garden author (mentioning no names) who had written about something like this in her book...how time works with gardeners...that “just a minute”really means I’ll see you in a couple of hours and how we as gardeners tend to get distracted. Maybe your new device could work, all long as the garden fairies don’t try to trick you by lining up a whole bunch of your devices at the same time. We will have to wait for the report!
Sun Jan 07, 10:26:00 AM 2018

MissPat said…
I could see how such a device might work if the area just weeded remained weed-free. Unfortunately, in my garden, the weeds seemingly pop back up almost overnight. So we'll await your report in the spring.
Sun Jan 07, 11:17:00 AM 2018