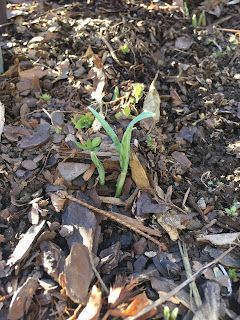 We are garden fairies and we have not posted for a little while because we are so busy we can barely keep up, what with the napping, and the snoozing, and the resting, and otherwise preparing ourselves for spring.

But rest assured, we nap, snooze, and rest always with one eye open so we can report on what is going on around here at May Dreams Gardens.

First, let us report that Carol has gone outside on the nicer days, but all she does is walk around staring at the ground, looking for a snowdrop or a crocus or some other signs of spring. We are garden fairies, and even though we know this winter is far from over, we took pity on her and pushed up a few snowdrop leaves (see picture).

Carol sure was excited to see those leaves. It isn't much and just goes to show you don't need a big show in a garden to make a gardener happy. It's the little bits, and leaves, that matter the most.

We might actually push up a few early snowdrop blooms if the warm, and by warm we mean above freezing, weather continues.  But we make no promises. We are still discussing it, weighing the pros and cons, and otherwise dithering around about it.

Anyway, we are garden fairies, as we like to remind people in case they think Carol is writing these brilliant posts, and today is going to be one of those warm January days that Carol always says she wants but does she take advantage of the sunshine and the relative warmth to do a little garden clean up?

Generally, she does not. She mumbles something about not being programmed to work outside in January. Or some such nonsense. She just had a birthday so we are watchful of her mutterings and mumblings to make sure they still make sense. So far, they do, but we are garden fairies and did we tell you that in another year, she is going to be eligible for another, older, gardening society? We'll write about that later.

So, anyway, what is she doing these days if not gardening? When will she go back out into the garden?

We are garden fairies, and we have answers.

This past week, she went and spoke at a home show, twice, about secrets to happiness in your vegetable garden. Ol' Granny Gus McGarden, who as regular readers know is in charge of the Vegetable Garden Cathedral, nearly passed out with mortification because some of those were her secrets and she didn't remember giving permission for Carol to be shouting them out to the world.

But that's what Carol did, at least as far as the world of the people who came to hear her speak.

When she hasn't been out blatting secrets, she's been working on finalizing her second book of gardening essays. We are garden fairies and we peeked at this book manuscript when she wasn't looking and let us tell you, there is a tiny bit more mention of garden fairies in this book compared to the first book but people shouldn't get their hopes up because we are not mentioned nearly as often as we should be, considering all that we do around here to keep this so-called garden from reverting back to a wild field.

Honestly, we only stick around because we hope for better each year and of course, there are those thousands of crocuses and glory-of-the-snow flowers we helped Carol plant in the back lawn.

Yes, we did help. Well most of us helped. Seedy and Soddy could have been more helpful but they said they were reserving their strength for when it is time to make all those flowers bloom.

Another month, and we'll all see the big show of lawn flowers, according to Seedy and Soddy's estimations of time and temperature which is usually spot on, but of course it is hard to be wrong in forecasting the big show of spring lawn flowers because that's usually when it has been the last several years.

Anyway, Carol is making noises like she's going to start using the computer again, something about final book edits, so we garden fairies will reluctantly end this blog post even though we are garden fairies and we have a lot more to say.

Submitted by:
Violet GreenPea MayDreams, Chief Scribe and Keeper of the Real Secrets at May Dreams Gardens.

P.S.  Carol awoke this morning to the sound of birds singing. Birdie FlyFlower said it was just some practicing they are doing for their big spring concert, but it should be noted it made Carol happy to hear it.