For Immediate Release: First Bloom of the Year 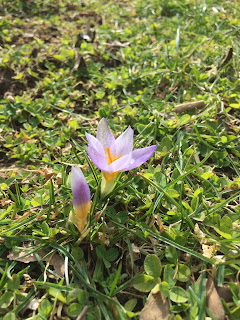 I am pleased to report that I spotted the first bloom of the year, a lovely crocus in the back lawn.  Oh, and it has a buddy, too. Get it. BUDdy?

This is not the earliest I've found a bloom in the garden in late winter but it's not the latest, either. So though it set no record, it is nice to see this crocus, nice to know that at least one flower thinks spring is coming.

Soon the rest of the crocuses and many other spring blooms will follow and my lazy, kick-back days of winter will be replaced by the frantic kick-it-in-gear days of early spring.

And those early spring days will be a tiny bit frantic. Mostly because I had a few too many lazy kick-back days last fall and didn't cut back a lot of the perennials or pull out a bunch of the weeds like I should have.

Yep, the days of reckoning in the garden are coming up quick.

But I don't mind! I'm all geared up to make this season in the garden The Best One Ever.

In other news, I spoke a few weeks ago at our local home show and got a nice hand-written note from one of the people who came by to hear me talk about the secrets to happiness in your vegetable garden.

No, I did not know her.  That's what makes the note so nice. 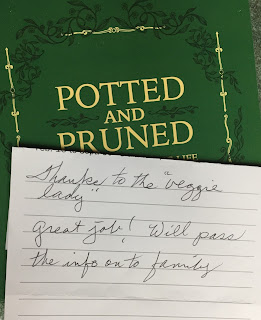 I also got an email from a local gardener and longtime reader who was disappointed because she didn't know I was going to speak at the home show and missed coming to see me. I checked and she isn't on Facebook which is primarily where I let it be known that I'd be speaking.

Of course, yes, I know and have known for a long time that Facebook isn't the end-all-be-all that some hope it is so I will look for other ways to let people know of upcoming events where I'll be speaking. Hmmm... perhaps I should start an email newsletter? Of course, that would need care and feeding and with a garden and a second book coming out, there is already a lot of care and feeding going on around here. I may still consider it.

In yet more news, I do have a second book coming out, perhaps in a month or so. It's a sister book to Potted and Pruned. I'll announce details in an upcoming blog post because a new book needs its own post, don't you think?