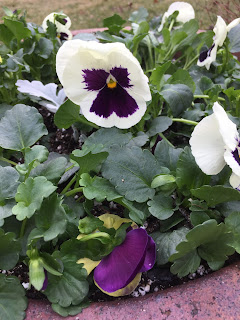 Yesterday, I set a new personal record for the earliest day to plant pansies in containers on my front porch.

Though I do not need a defense for my actions, if anyone should question my wisdom in planting so early I have several pieces of evidence I can present on my own behalf.

First, I enjoyed a record high temperature of 76º Fahrenheit (24º Celsius). I challenge any gardener to resist this kind of weather and stay out of their garden. It is almost impossible to do.

Then the extended weather forecast indicated we are going to enjoy moderate temperatures here in Indianapolis for at least the next ten days, with occasional dips in nighttime temperatures below freezing, which won't hurt the pansies. Those ten days will take us into March. And everyone knows March is fair game for planting pansies most years around here.

Finally, the owners of the local greenhouse sent me messages on Facebook with pictures of their pansies in bloom, ready to plant. They know the tradition is for me to be their first customer in the spring. Most years, including this year, I've bought my pansies from them before they've even put out their open-for-business sign. This year I was technically their second customer, but I could see that their first customer just cherry-picked a few individual pansies. Lightweight gardener. Doesn't count. I bought four flats of pansies.

I rest my case.

As I planted my pansies, I recalled how years ago my dad planted his peas at least once in February, which is early around here.  I remember the year, too. 1983. I was home that day and had just received a job offer for what was to be the beginning of a 33-year career in healthcare information technology. Though at the time, I didn't know it would be a 33-year career. I accepted the offer so I would be employed while I continued looking for a job that could combine my love of gardening with my ability to program computers. The best-laid plans... what were we talking about?

Oh, yes, we were talking about my father planting his peas early. I figured out that day was February 23, 1983, a Wednesday, his normal day off from work. I looked up the weather for that day and found out the high temperature was 50º Fahrenheit. If 50º Fahrenheit was warm enough for my dad to sow peas in his garden, what would he think of his daughter if she didn't sow her peas on a February day with a high temperature of 76º Fahrenheit?

We will never find out because after I finished potting up all the pansies, I sowed a nice row of peas in The Vegetable Garden Cathedral. This year I'm starting off with two varieties — 'Progress 9', a dwarf variety of shelling peas which supposedly doesn't need staking, and 'Snowbird', an early sugar pea, also a dwarf variety.

After I finished planting the peas, I sat in a chair and surveyed the garden, making a mental note of what I should have been doing instead of sitting. I should have been cutting back perennials, pulling out those opportunistic early spring weeds, and generally sharpening up the edges of the garden blurred by winter.

Instead, I enjoyed the view of the crocuses blooming in the lawn.  After a while, I got up with the intention of taking some pictures of the crocuses. 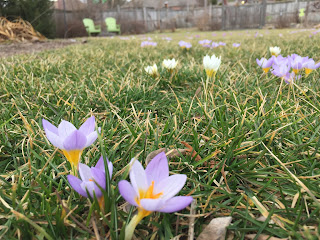 I have trouble photographing the crocuses in a way that shows how pretty they are to see. If I stand and point the camera at the lawn, I end up with pictures of a big expanse of green with little dots of color. If I lie on the ground to take the picture, I get a good close up view of a few crocuses with the idea of more in the background.

But who lies on their lawn to view and take pictures of their crocuses? Finally, I figured it out. Forget the photographs. The best way to view the crocuses in the lawn is from sitting in a chair after an afternoon spent planting pansies and sowing peas.