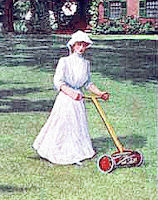 She hurried across the lawn, doing her best to not trip over her flowing white skirt. Oh, how she hated to be late for anything, especially when it was her turn to mow the lawn.

When she reached the garden shed, she threw open the doors and grabbed the handles of her mower, which she affectionately called Forest.

"Forest," she said, "please don't be balky today. I haven't got time to play your funny little mowing games."  With that plea, she pulled Forest out of the shed and began to mow the lawn.

Back and forth she mowed, a vision of white in her long dress and hat, lost in her own thoughts. She was careful as she mowed and sang out loud to warn the garden fairies of her approach, a habit she had picked up after a close call the previous year.

It was early spring, 1910, and she had a lot on her mind, as a gardener generally does in the springtime.  She wondered if she could make her garden bigger without anyone noticing or commenting.  She thought about what she would plant in the garden once she was sure of the last frost. She hoped the weeds wouldn't be so bad this year.

Suddenly, out of nowhere, a man appeared and told her to freeze in place. She looked over in the direction of the command and was startled by the flash from his camera. She shrugged and continued on, never realizing that her quiet moment of mowing and pondering would be forever immortalized on a farm and garden supplies catalog.

But it was, and henceforth she became The Mowing Lady, who might have been forgotten had it not been for another gardener who discovered her picture nearly 100 years later on the cover of the 1910 Ross Bros. Co. catalog for seeds and agricultural goods and farm and garden supplies.

So, when it came time for this other gardener to come up with a logo to use for her books, to use as a watermark for her photos, there was no other choice. 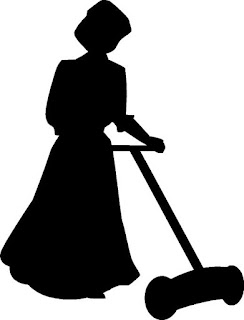 Forever and ever more, The Mowing Lady.
Blogging