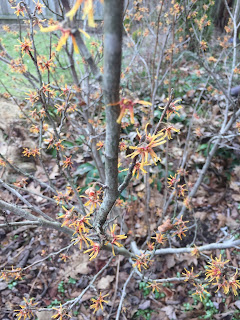 My goal for the last several years is to have something newly blooming at any given time in my garden. Then it will always be "spring" in my garden, at least for one or two plants.

That's one of the reasons I planted the native Vernal or Ozark Witchhazel, Hamamelis vernalis.

It usually blooms in February, and right on schedule, it is blooming this February in my garden.

Though the flowers aren't that showy—especially when you have the straight species like I have—they do have a nice scent which I caught a few whiffs of as I worked on cleaning up this particular border. This is where most of the hellebores are and it is time to cut off their old foliage.

Surprisingly, given how many garden borders and beds I've named around here, this particular bed with the witchhazel has no name... yet. I'm sure I'll figure out a name in due time. No reason to rush these things.

I was curious about the witchhazels, or witch hazels if you prefer,  so I did some investigating.

Who pollinates a flower that blooms in February, when we can often have snow on the ground? (Though this year we don't have snow, thank goodness.)  It appears some kind of winter moth pollinates it, but it is hit or miss, as it would be with winter flowers, so the witchhazel rarely sets any kind of fruit or seed. You do not have to worry that your witchhazel will self-sow around your garden!

What other uses are there for witchhazel? Well, glad you asked. Apparently, native Americans used forked witchhazel branches as dowsing rods to help them find sources of underground water.  Whether or not they used this particular species, I don't know. Most of the references are for the Common or American Witchhazel, Hamamelis virginiana, which is noteworthy for blooming in late fall to early winter. I will have to look over my Vernal Witchhazel to see if there is a suitable forked branch for dowsing, or divining as some call it.

Maybe I'll call this border with the witchhazel "The Divine Border" in honor of this use of the witchhazel branches? Hmmm... I like that name. I will try it out and see if it sticks.

Anyway, after it blooms and the leaves come out later in the spring, the witchhazel is a lovely, large, green shrub which looks best in a mixed border. In the fall, the leaves turn to yellowish orange, as I recall. That makes it at least a two season plant, and since there aren't that many winter season plants,   I recommend you plant one.

I also recommend you go see what else is going on for Wildflower Wednesday at Clay and Limestone where Gail hosts this monthly meme. (She's featuring another native shrub blooming now and dog-gone-it, I want one for my garden. It could keep the witchhazel company in The Divine Border!)