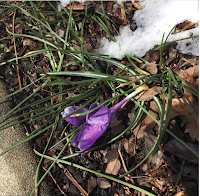 We are garden fairies and we have just lived through one of the most horrific, stressful weekends ever in March which involved over ten inches of snow, on one day.

What made it all the worse is that Carol was nowhere to be found anywhere at all around the garden, around the house. She was missing in action. We thought perhaps she had abandoned us or maybe she was ashamed of the snow she caused.

That's right, we garden fairies for quite some time on Saturday were blaming Carol for the snow. That's what happens when you aren't around. You get blamed for stuff, like ten inches of snow.

We have never seen so much snow this late in March and neither apparently has anyone else because there was talk of new records being set.

Even Granny Gus McGarden, who is the oldest and wisest among us garden fairies, said she had never seen such snow so late in the season.  And oh by the way, she put a stop to us blaming Carol, especially when Seedy and Soddy started to plot their revenge.

Granny pointed out that it wasn't Carol's fault, that her absence had nothing to do with the snow.  She said it was all Mother Nature.

Anyway, she finally showed up Sunday morning early. Apparently, she drove up to the northern part of the state to speak about gardening and took her sweet time getting back so she wouldn't have to drive through the actual snow storm. Wimp. By the time she got back, all the flowers were covered.

It melted so much, Carol didn't even have to shovel off the driveway or front walk. It was down to bare pavement by the time she even thought about possibly maybe shoveling. She got off too easy this time!

Anyway, Mr. Sun exposed some of the blooms and let us tell you right now we are garden fairies and we have our work cut out for us to get this garden back into shape for the World's Greatest Family Easter Egg Hunt which is just six days away.

And we hope Carol helps out with the garden clean up because we are garden fairies, we cannot, will not, and refuse to continue to do everything around here to make this garden look nice.

This one was later on Sunday after a whole bunch of snow melted, especially on the pavements. Those are violas planted in that container under that snow. Of course, had Carol been here, we would have pictures of the actual snowflakes, which were huge. 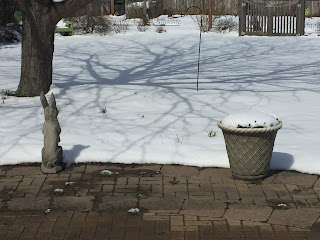 Iris in the snow. So pretty. So brave. So willing to do whatever it takes to continue to look nice, sort of.  We won't blame them if they just give up now because, honestly, they've been blooming for over a month. 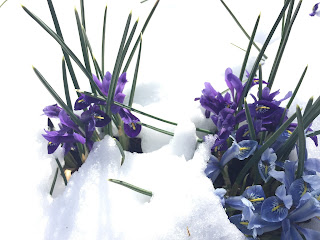 We garden fairies have noticed that snow melts into water. We are having trouble keeping up with moving the water out of the garden. Pools of it everywhere. Seedy and Soddy have been put in charge of water removal. 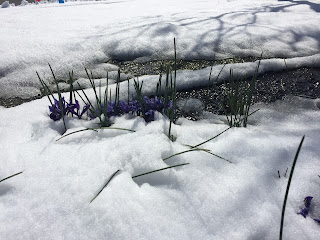 We think these little flowers are about the prettiest of all in the snow. Siberian Squill. 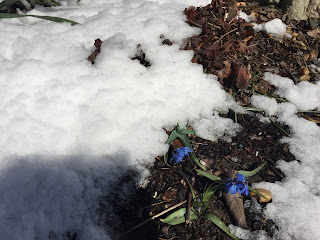 And that is all we garden fairies have time for!
fairies humor