How to introduce a second book 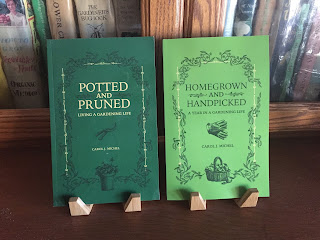 I've been all over the internet looking for information on how to introduce your second book to your first book in such a way that the two will live in harmony.

There are countless articles on introducing new dogs to old dogs, new cats to old cats, cats to dogs, dogs to cats, toddlers to babies, even new fish to old aquariums.

But I can find nothing on how to introduce your second book to your first book.

Allow me to fill in this gap and provide some insight on my own experience, gathered over these last 24 hours since the new copies of my second book, Homegrown and Handpicked: A Year in a Gardening Life,  arrived on my doorstep.

By the way, I've given it the nickname H&H.

First, in reviewing some of the other helpful tips on introducing new to old, I found that many  experts suggest the first meeting be on neutral territory.  I decided my front hallway would work for neutral territory because it isn't the room where I keep copies of my first book, Potted and Pruned: Living a Gardening Life. By the way, its nickname is P&P.

I also read that I'm not supposed to hold the new book when I introduce it to the old book. That was was easy advice to follow. I put H&H and P&P side by side and took a picture. Don't they look good together?

I also read I'm supposed to watch closely for a few days to ensure there is no bullying going on, or hogging of food or time or whatever.  I guess in the case of books, I should watch for gouging out of "i's", tearing of pages, random scribbling in on another's margins? I've seen none of that kind of behavior so far, thank goodness! H&H and P&P seem to be getting along well, which is good because they will be forever linked as my first and second books.

Finally, I read that I should also refrain from keeping them confined together. Confined?  I've got the books in separate bins, but the bins are in the library together. That's going to have to be good enough for now but I'll still keep an eye on them for a few more days and watch for signs of bent covers or other bookish shenanigans.

Oh, and by the way, the book fairies have already started to make eyes toward the new books. They like some of the chapters, especially the one chapter about... Oops, don't want to give away too much too soon.

See my book page for updates on availability of both H&H and P&P.
books humor