I'm a Bit Embarrassed to Admit... 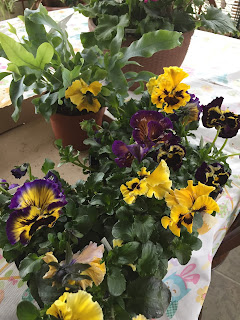 I am a bit embarrassed to admit how long it has been since I vacuumed around here.  Where does the time go?

Good question. Time just goes, doesn't it? It only stands still in a garden. The rest of the time? Swoosh. It goes by fast.

But in my defense, these last several months I finished up my second book and published it, and before that there were holidays and in between all that I've written some articles and a monthly to-do list for Burpee.

Oh, and speaking. I've done some speaking, too. And reading, and goofing off, and planting pansies, and cleaning up the garden a little bit, though I'm not done spiffing up the garden for spring what with all the rain and snow we've had around here.

Notice how I stuck "goofing off" in the middle of the list so you wouldn't notice it? That's a trick I learned somewhere.

(Garden fairy note: But then she blew it by pointing it out. She absolutely goofs off a lot of the time. We are garden fairies.)

Anyway, I finally got the vacuum sweeper out the other day.

Truthfully, though, I didn't really get it out. It has been sitting in a corner of the great room taunting me for weeks, in plain view. It has been out since I put away the Christmas decorations in early January. In fact, it's been in one spot for so long there are little indentations in the carpet that look permanent.

So to be accurate, let's just say I finally reached for the vacuum sweeper so I could vacuum before the Easter gathering. Before turning it on, though, I decided to empty the canister to remove all the Christmas tree debris and holiday glitter it had sucked up the last time I used it. It has one of those clear see-thru canisters so you can see how much dust and filth is in it after vacuuming. Ick.

Anyway, when I looked at the contents of the canister, I couldn't believe what I was seeing. It was incredible. I don't even know how it happened.

There in the dust and tree debris and glitter from the last time I vacuumed, a plant was growing. Flourishing inside the canister. Growing vigorously. It was amazing! The plant was thick with leaves and looked healthy in spite of growing in dust and not being watered.

My hypothesis as to how this happened is that the last time I vacuumed, I must have sucked up some seeds that had spilled out onto the sunroom floor, and at the same time picked up a bit of water that had sloshed on the floor when I was the watering plants in there.

That, along with the Christmas tree debris and glitter, was apparently all that seed needed to germinate, take root, and grow in the canister of my vacuum cleaner.

It just goes to show, plants don't really need as much as we think they need to grow.

(My apologies for not getting a picture of the plant before I emptied the canister. After all, I did need to vacuum the floors before for my family Easter gathering. Instead, enjoy the picture of the fancy pansies I bought to plant up a container for my table centerpiece.)

Cindy, MCOK said…
I just read this, emailed an eminent publisher I met once on a bus and suggested s/he offer you a contract immediately for a book to be entitled "New Uses for Old Vacuums, or alternatively "Growing Plants in a Vacuum: You CAN Do It!" S/he should get back to you within an hour. Or two.
Sun Apr 01, 10:27:00 AM 2018

Jenny Klein said…
WOW! It's pretty incredible what nature is capable of. It's interesting because sometimes I really baby my plants as if I'm the only chance they have to flourish. Fun article
Mon Apr 30, 03:26:00 PM 2018