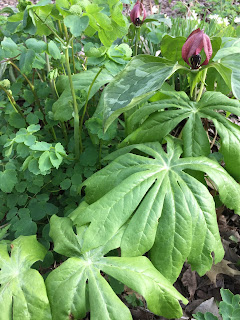 I have a little puddle of mayapples, Podophyllum peltatum, growing in my garden.  It's the plant with the umbrella shaped leave in the picture.  The other plant, with the red bloom, is a Trillium.

Both plants were rescued from a wooded area that was going to be dammed up to form a lake. Otherwise, I would have never dug them up and brought them to my garden.

I wanted the mayapples, especially, because they remind me of going mushroom hunting with my siblings and my dad when we were kids.

We'd tromp through the woods, swishing back leaves with sticks as we searched for morel mushrooms and then suddenly come across huge patches of mayapples in the middle of the woods.

I thought those patches were magical.

Now, a sensible gardener might remember "huge patches" and use caution when transplanting such a plant to her own garden. But I've never claimed to be a sensible gardener. I'll take a chance that these won't grow to be a "huge patch" because the spot where the mayapples are growing is far from ideal. Too much sun, if you ask me.

But I'll keep a watch on them, I promise. Just in case. 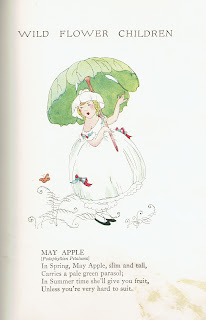 This illustration from Wild Flower Children by Elizabeth Gordon (1918) shows another side to mayapples. Because, well, they are magical!