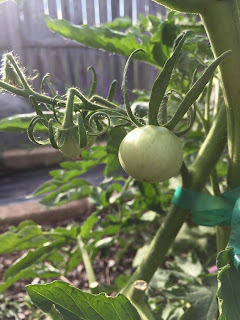 We are garden fairies and we have decided enough is enough, it is time to provide an update on The Vegetable Garden Cathedral because apparently if we don't do it, no one (Carol) will do it.

Well, the first thing we have to report... let's get this bad news over with first... Granny 'Gus' McGarden is just beside herself with worry.  The 'German Johnson' tomatoes, which traditionally are supposed to be, have to be, must be, the first ripe tomatoes each summer, have blooms but no tomatoes.

Carol is going to have to disqualify every single one of them as they ripen and come up with plausible–yes we said plausible– reasons as to why they are not, cannot be, and will not be the official first ripe tomato of the season.

Because the first ripe tomato of the season has to be the 'German Johnson' tomato.

That's the tradition, and that's just how it has to be.

In other vegetable garden news, the pepper plants look terrible. Carol fertilized them last night and then watered them. Which she had to do by hand, the watering, because her sprinkler broke. She didn't really get mad though because by her recollection, she'd had that sprinkler for 25 years. For a sprinkler, that's a pretty good run.

Anyway, we are garden fairies and we remain hopeful that the pepper plants will snap out of whatever funk they are in and start doing better. Soon.

And we are grateful that when Carol came out last evening to fertilize the garden and water it, she realized the tomato plants have grown at least a foot since she last looked,  and so she took the time to sucker them and tie them up.

Yes, sucker them and tie them up because she stakes her tomatoes which as regular long-term readers of this blog know, and as she wrote in her book, Homegrown and Handpicked: A Year in a Gardening Life, staking is the proper, correct, and best way to grow tomatoes.

We are just going to put it out there. Only slackers cage their tomatoes.

What else? Oh, one of the squash plants has powdery mildew of some kind on it, but thankfully, most don't.  Carol was almost happy about it because pretty soon she's going to write an article about squash troubles and that will be one of the troubles she writes about, we think.

We are garden fairies and there is more to say about the goings on in The Vegetable Garden Cathedral and here at May Dreams Gardens, but we just don't have the time to write it all down so we are going to end with a plea to Carol to please come out here and weed again. She should know by now that weeding isn't a "once and done" activity, but a constant necessity in a vegetable garden.

The pumpkin plants, especially, have made noises about moving on if she doesn't weed their bed soon.

And that's all we care to report. Granny 'Gus' McGarden says "hi" to all and she hopes that she can still produce a good harvest from the garden,  in spite of Carol getting such a late start planting everything. Or maybe just to spite Carol.

But we are garden fairies, not miracle workers.