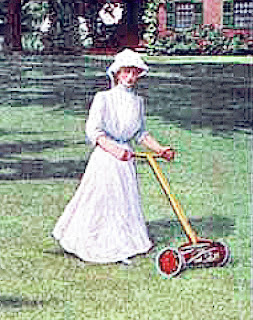 When I'm out in the garden, and especially when I'm mowing the lawn, I feel like a movie star.

Sometimes, I channel Sally Field in "Places in the Heart" when she played the part of Edna Spalding, the young widow in Texas who had to take over the farm after her husband died and harvest the cotton so she could pay the mortgage.

Remember those scenes when she is out in the fields picking cotton with her rag-tag crew and her kids? Remember how sweaty she looked?

That's kind of how I look sometimes when I am mowing the lawn. All sweaty like that.

Fortunately, though, I don't have to mow the lawn to pay the mortgage.

Other times, I play the part of Rose Sayer, brought to the big screen by none other than Katherine Hepburn. Rose was the missionary somewhere in Africa whose brother was killed by the Germans in World War I. Rose then convinced a man named Charlie, played by Humphrey Bogart, who had a boat called the African Queen to go after a German ship so they could blow it up and she could avenge the death of her brother.

She looked quite sweaty as they chugged along on that old boat, didn't she? I wonder if that was real sweat or Hollywood fake sweat?

Of course, I don't generally wear a frilly shirt with a high lace color and long sleeves like Katherine did in that movie. In weather like we've had lately, I wear a T-shirt and shorts and lather on the sunscreen lotion.

What I do share in common with Katherine in "The African Queen" is I wear a wide-brimmed hat. Though my hat doesn't have a long chiffon ribbon to tie it on.  Mine is a Tula hat with a leather lace to keep it secured to my head. Sometimes I wear the Tula hat I won at the first garden bloggers' fling in 2008 in Austin. Other times I wear the Tula hat I bought the week after I retired. I feel like both hats will last forever.

Then there are the times when I feel like the movie star Vivien Leigh when she played the part of Scarlet O'Hara in "Gone With the Wind", especially the scene when Scarlet is out in the vegetable garden digging for root crops to eat, sweating like crazy, and swearing she'll never go hungry again. In that scene, she's wearing an old bonnet.

I wonder what the neighbors would think if I wore an old bonnet when I mowed the lawn.  Maybe I could complete the ensemble by making a dress out of curtains that were just hanging around?

No, I'd better not. I'll stick to my shorts and T-shirts. But I'll always feel like a movie star, with real sweat not fake sweat, every time I mow the lawn.
humor lawn