She Saw Me, A Chipmunk's Tale 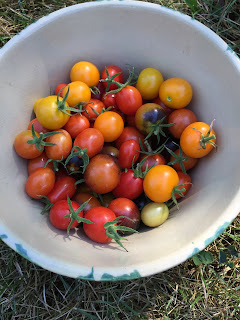 Chance Chipmunk was out of breath and soaking wet as his chipmunk friends and family gathered around to find out what happened.

"She saw me! And then she turned the hose on me and chased me as I ran and hid under the big hosta. She soaked me good."

"Oh dear," said Sweet Charlene Chipmunk. "Are you sure? Well, you are soaking wet. Maybe you fell in that birdbath again trying to get a drink of water after partying all night."

With that everyone gasped and began to murmur amongst themselves. They were worried. What would Carol do now that she knew there were chipmunks around her garden?

Some of them thought she would do nothing because she is so lazy.  But the older, wiser chipmunks including Charlemagne and Chadwick, shushed, yes shushed, the crowd and began to lecture.

Charlemagne said, "We all need to be careful. It's possible she will set a trap with delicious food and then when she catches you because you won't be able to resist the delicious food, she'll take you in the trap as far away as she can, usually across a body of water so you can't find your way back, and let you free there. If this happens to you, don't panic, there are other chipmunks on the other side of the water who will help you. In fact, our dear brother chipmunk, Chaucer, came to us that way. We took him in and he is one of us now."

With that, everyone around Chaucer patted him on the back to make sure he knew he was part of their family now.

Then Chadwick added, "Whatever you do, please do not get lured up any boards to more delicious food like sunflower seeds. If you do that, it will lead you to a bucket of water, you'll fall in and you'll drown, just like that."

They all shuddered at the thought.

Little Chester Chipmunk worked his way to the front of the group so he could be seen and heard and asked, "Does this mean we should stop eating her cherry tomatoes?"

Chadwick and Charlemagne conferred with one another and then made an announcement. "We think you can eat some of the cherry tomatoes because she never gets around to picking all of them, but leave no trails of half eaten fruit or she'll catch on to us."

"Should we worry about poison food?" asked Sweet Charlene Chipmunk.

"Heavens no! Carol would never poison us because she knows if one of us gets poisoned and dies out in the open, and then gets eaten by an owl or hawk, it will poison them, too. No, we are safe from poisons."

Hearing there would be no threat of poisoning, they all relaxed a bit as tiny Chaplin Chipmunk came forward and announced, "I have a confession."

They all turned and looked at Chaplin.

"I got on the front porch and dug in one of the containers up front and Carol noticed. I'm sorry, I thought there was a delicious bug in there that I just had to eat. I was so hungry."

"Well, that's not good," said Chadwick. "But thank you for confessing. Now everyone, listen up. We must all stay out of the containers. Nothing, I mean nothing, makes a gardener madder than finding out a chipmunk has been digging around in her containers. Carol is already not happy to have seen Chance.  Now, repeat after me, No More Digging."

With that, they all chanted in unison—Chance, Sweet Charlene, Charlemagne, Chadwick, Chaucer, Chester, tiny Chaplin and all the other chipmunks—"No More Digging" as they went off in their separate directions.

Meanwhile, out in the garage, Carol was rattling around looking for...

To Be Continued.
humor pests