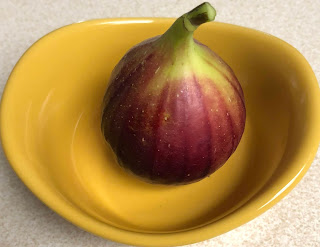 This week I've been immersing myself in the world of figs.

I had, have, so many questions about figs because I've never grown them before and other than eating them in Fig Newton cookies, never really ate them.

Oh my goodness. They are so much better fresh than in a cookie!

I did read that the figs have to be pollinated by a fig wasp before they will ripen. "Whoa, nelly," I asked myself, "are there fig wasps around here where figs don't normally grow who can pollinate my fruit so it will ripen?"

Then I read that these domesticated figs generally do not need a wasp to pollinate them to ripen.  Which is good because I was having visions of going out to the fig plants and acting like a wasp by drilling a hole into each fig to make it think it had been pollinated.

I also figured out that there is no such thing as a fig flower. Just fig fruit which forms without a flower first and has the flower parts inside of it. Which leads to the old saying, and I paraphrase, "As rare as a fig flower". In other words, if you can find a fig flower, you can probably also find a unicorn!

I also read that vegans won't eat figs because those wasps that go into the fruit to pollinate it generally don't make it out of the fig. They don't live long and expend all their energy laying eggs and spreading pollen inside the fig fruit so there is nothing left to leave with. But the fig wasps are so small that by the time the figs ripen, you wouldn't see any bits of wasps left inside. And see above about domesticated figs.

After I had sorted out in my mind the whole wasp-pollination deal, I hopefully wondered if the various animals that pass through my garden would know the figs are edible? After all, figs are not native to this area, so how would they know?

Turns out they do know. I think. There were little bite marks on the backs of the two figs that have ripened, but I knicked those off with a knife and at the figs anyway. And I saw at least one stem left on one fig plant that appears to have been where a ripe fig once hung, but hangs no more. Drat those critters!

To complete my week of obsessing about figs, I also read Gods, Wasps, and Stranglers: The Secret History and Redemptive Future of Fig Trees by Mike Shanahan. It's a fascinating history of figs and explains how plants in the genus Ficus are often the first to return following catastrophic volcanic eruptions and have been used to restore rainforests that were destroyed by over-farming.

Anyway, now I want some houseplants in the genus Ficus.

And so begins another obsession.