Winter Has Arrived And It is Making Me Shovel the Driveway 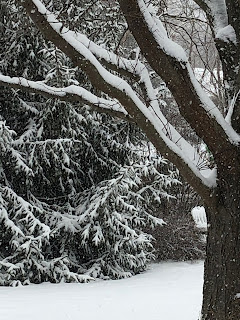 A few weeks ago, well actually last weekend when it was warm enough that I went out and cut down my grapevines, I had this fleeting idea that perhaps we were going to escape actual "winter", meaning, of course, snow.

I was wrong. Foolishly so. I guess.

We aren't going to escape actual winter. We never do.

But we can certainly hope that this snowfall is it. The big show. The big snow. The one. The only.

Okay, that would also be foolish to hope for.

What we should hope for is an early spring.

And not an early spring like we had last year when it got to 70º Fahrenheit on February 20th and then March was the snowiest March I can ever remember with a foot of snow one weekend.

Nope. We wish for a true early spring.

But not too early because winter weather like this invites us to stay home and read and browse through seed catalogs and spend extra time dreaming without feeling like we need to go out and cut down grapevines.

Which, by the way, I don't feel a need to do because I already went out and did it! Did you catch that in the opening sentence?

Yes, after 20 years, I am saying good-bye to the grapevines. To the annual spring cutting back. To the summer whacking back of out of control vines. To the guilt of growing grapes and not harvesting them to make grape jelly and put it in cute little jars with hand-made labels that say "From Carol's Garden and Kitchen." To the mulberry tree seedlings that hide amongst the grapevines until they are tall and well-rooted.

Good-bye to all of that.

Well, good-bye once I cut out the stump. Otherwise, the grapes will come back.

But I have no guilt about not cutting out the stump right now. I can't. It's buried under six inches of snow. At least.

So all I can do is read and dream about what I'm going to plant there instead.

That is, it is all I can do when I'm not outside with my snow shovel.

Because winter has arrived and is making me shovel the driveway.

P.S.  Want to know what I use to shovel my driveway all by myself?  I use this snow shovel which really is awesome. and oh my, how the neighbors stare with envy when they see it. A neighbor out running in the snow actually hollered out, "That is the coolest snow shovel I've ever seen." (Affiliate link).