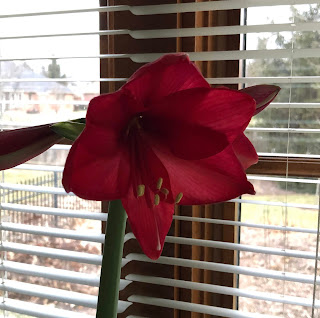 On February 10, 2007, I announced via a blog post that I would be starting a new practice of surveying my garden on the 15th of every month to see what was blooming.  I invited other bloggers to join me and called it Garden Bloggers' Bloom Day.

This was before Facebook, Twitter, Instagram and the overall rise of social media. All we had back then were blog feed readers and the practice of occasionally checking in on our favorite blogs to see if there were any new posts.

Those were the days!

I was inspired then, as I am still now, by the words of the southern garden writer, Elizabeth Lawrence.  "We can have flowers nearly every month of the year."

I asked bloggers to join me so we could compare our gardens to those across the pond. So we northern gardeners could see what was blooming south of us and what we might look forward to, or in the case of camellias and crinums to name a few less hardy plants, be envious of.  So you southern gardeners could have your envies too, of peonies and lilacs.

So we could all see what we have in common.

After completing twelve years of those posts, and never missing a single post (but coming close once or twice), I realize what we have in common is not so much flowers, but a shared love of gardening and a willingness to let people come through our garden gates to exclaim over those blooms at least once each month.

In my inaugural bloom day post, my garden was covered with snow and I didn't have any flowers to show. I just listed a few indoor blooms but didn't think to show pictures of them. Of course, that was also before we all had smartphones which gave us nearly instant access to our photos. We did have digital cameras, which required us to take the pictures and then upload the photos to our computers. Oh the effort!

For those who have followed along for most of the twelve years, perhaps the nicest result, other than meeting so many other passionate gardeners, is that you now have a twelve-year record of when flowers bloom in your garden and whatever other information you decided to share on those posts.

I sometimes ask myself why we still do this. How has Garden Bloggers' Bloom Day survived as an Internet meme for twelve years when others have come and gone or hang on by a thread?

I've also tried to make it easy to join in with no rules per se. Just post on your blog and leave a comment/link on my bloom day post.

I have no thought of ending Garden Bloggers' Bloom Day.  Fewer bloggers participate now, of course, especially in the winter time, but there are always enough, and mostly, I want to keep going with tracking what blooms in my garden every 15th of the month.

So tomorrow, on the 15th of February, I'll be starting the 13th year of Garden Bloggers' Bloom Day.  I hope you'll join me!