Garden fairies get a glimpse of next book 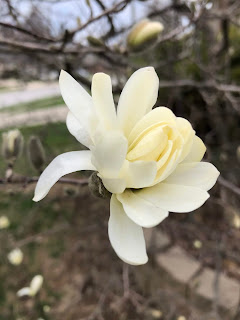 We are garden fairies and we are just as excited as can be to tell everyone that Carol is writing feverishly these days on yet another book.

Yes, we know about the trilogy of gardening humor, in which we garden fairies are barely mentioned. And we've seen the Christmas children's book where we went from "barely mentioned" to not mentioned at all.

So as fine as those books are, we garden fairies can't get too excited about them because did we mention the lack of garden fairies?

Well, we've seen what she's been writing lately and let us tell you...

And Granny Gus McGarden reports that seedlings are starting to break through the soil in the Vegetable Garden Cathedral.

Seedy and Soddy also reported that the violas and sweet peas are doing well and they are on standby to watch for the first woodland violet blooms. Carol is diligently watering the container plantings when they need watering. And though a lot of the alyssum got zapped by that late, unexpected snow, Carol has replanted new alyssum to take their place plus—and Sweetpea Morninglory got really excited about this—she also planted some snapdragons this spring.

It's been a while since we've had snapdragons around here so we garden fairies are super excited to see them at the end of the raised beds in the cathedral.

We garden fairies have also decided that we are going to create the first ever Garden Fairy Editorial Committee to make sure we garden fairies are accurately and specifically represented in Carol's next book.

That's all we've got to say about that at this time.

But we have plenty to say about Carol and her gardening. She better get out here quick like with her weeding tools. Ol' Rainbow Tanglefly says he hasn't seen so many weeds since well, this time last year.

P.S.  Carol apparently promised people she spoke to this weekend and last weekend and even the weekend before that she would post her Secrets to Happiness in Your Garden on this blog if they didn't take good notes. We are garden fairies, not miracle workers. We will do what we can to get Carol to post those secrets, but we make no promises.