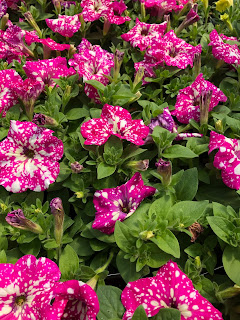 Certain events have transpired that make me think that I might be becoming...

I should have seen it coming. I quite innocently stopped by the local greenhouse to take a few pictures of petunias to use to promote the latest podcast episode of The Gardenangelists.

One of the segments in this episode is on—you guessed right—petunias.

Now, here in Indiana, I won't start planting petunias out in containers until probably the third week of May, and we still have one more week of April to go. That's nearly four weeks from now.

Why so late to plant petunias, you ask?

I like to give the violas and pansies which are in the containers where the petunias will go time to flourish and be their best until it gets warm enough that they start to fade.  Right now, they are glorious!

Also, and more importantly, I like to make sure that we are well past our frost-free date, which around here is May 10th or later, before I plant out summer annuals, including petunias. Petunias will survive temps in the high 30's, which we could still get at night. But they will falter well before their time if it dips to 32 degrees Fahrenheit or shiver-I-hope-not, below that.

And it could still do that here. Though we hope it doesn't!

So why are there two flats of petunias on my front porch ready to plant if I'm not going to plant them for another month? One is 'Pink Sky' shown above.

The other is 'Night Sky'. 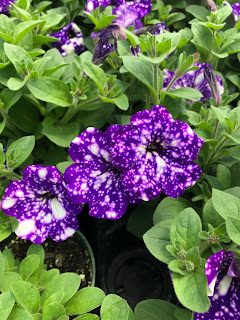 And I'm about to go back and buy 'Crazytunia Moonstruck'. 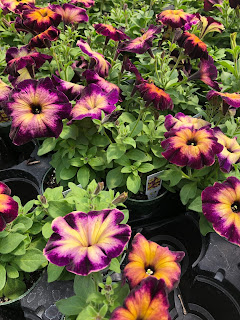 And I sent a note to the greenhouse people to find out if they have a petunia called Supertunia® 'Honey' which is a yellow that fades to pink. Gotta have that!

The reason some of these petunias are already on my porch a month before I plan to put them in containers is because they seemed to be in short supply at the greenhouse and I didn't want to miss out. I guess others are buying petunias already, too.

And, again, why was I even thinking about petunias this early?

Because on the latest Gardenangelists podcast episode, Dee (of Red Dirt Ramblings) talked about all these great petunia varieties and so of course, I want them.

But now that I've hoarded bought 'Night Sky' and 'Pink Sky', I might as well go back and get the others I want. After all, does it matter whether it is two flats or three flats or six flats I'm watching over for the next month?

Rhetorical questions do not need answers.