OPGs - A Guide to Visiting Other People's Gardens 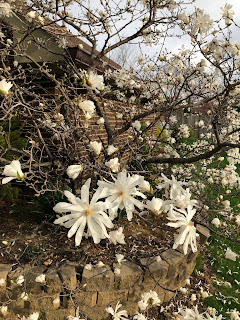 A Guide to Visiting Other People's Gardens

Yes, it is getting to be that time of year when garden tours, walks, visits, parties, etc. are starting to pop up like dandelions in my back lawn.

(I don't mind the dandelions. They provide pollen for the bees and in a pinch, it's nice to know I could eat the greens or make wine from the flowers. Is that what part they use for wine? I really don't know. And once they go to seed, what's better for your gardening soul than to blow those dandelion seeds off the stem and watch the wind carry them off to parts near and far?)

With all those visits to Other People's Gardens (OPGs), one is bound to come home with a case of "throw in the trowel my garden will never be as nice as their garden" or a bout of "let's just bulldoze this whole garden and start over."

Tsk, tsk, don't think like that or talk like that! A good trowel can be expensive so let's not throw them around. And a bulldozer! My goodness, your garden is not that bad!

To come home feeling like your garden is a pretty good garden, too, because it is, here's a guide to use when visiting OPGs.

1. Look for fresh mulch. Oh yes, indeed. I've arrived to see a garden on tour just as the landscaping crew is pulling away. That's why there's fresh mulch everywhere! Sure, you can and maybe should hire someone to spread mulch around your garden, especially if you are going to have people tour your garden. No mess, no fuss, and the crew takes the leftover mulch home on the truck. For the rest of us, fresh mulch is usually in a pile on the driveway or in bags on the back patio for a quite a while as we putter about day after day spreading it around.

3. Look for freshly planted anything. I've seen stuff planted in gardens on tours that would never flourish, let alone survive, in the spot where they planted it. It was put there for show so the garden would look good for the day it was on tour.  It's like walking into a fancy house and seeing a borrowed Rembrandt painting on the wall. You know as soon as the tour is over that Rembrandt is going right back to the museum it came from. (Do some people really get to borrow museum art to put on display in their homes?) And in its place, they will put back some cheap poster they had framed at the local craft store. Maybe it is the one with the kitten hanging from a tree with the caption "Hang in there?" A throw-back to their college days! Ha! Which reminds me of those movie stars who wear all that fancy jewelry to their award ceremonies. Remember, just off camera is a security guard ready to tackle anyone who even thinks of taking one of those priceless pieces of jewelry. And right after the ceremony, back in the vault go the jewels, and the movie stars take off their faces and guess what? They turn out to be regular people. That's what happens in gardens. They take out those fancy plants and guess what? Those gardens turn out to be regular gardens.

4. Look for the checkbook. OPGs often have bigger checkbooks than you or I could ever hope to have. That doesn't make them better gardens. It's like a good bowl of soup. Wouldn't you rather have your own homemade soup made with fresh veggies from your own garden, using your mom's secret ingredient that she learned from her mom and then passed down to you? Or would you like a skimpy bowl of a watered down version of whatever soup the fancy restaurant is passing off as "homemade." It isn't homemade! It just costs more. Yours is better!

5. Take ideas, but nothing else. Now, it sounds like I am skeptical when touring OPGs. I'm not. I just go in with my eyes wide open. I have learned to look past the fresh mulch, the lack of a compost pile, the freshly planted plants, and the big checkbook to find the bones of the garden, the good ideas that anyone can try in their own garden. I take those ideas. They are free!  (Good heavens, I hope I don't have tell you, fine readers, that the only thing you should take from a garden you are touring is pictures (with permission) and ideas (no one can stop you from taking ideas). Don't pinch seeds, plants, or anything else. They won't grow!

There's your guide, what to look for and what to take from OPGs.

Jane Strong said…
I've known people who even take the pants back to the nursery after the tour is over!

Anonymous said…
My only additional thought is that one should make only kind comments about OPG while touring. Even if there is fresh mulch, no compost pile and big bucks, chances are someone cares about the garden and would b hurt by critical comments, mocking, etc.