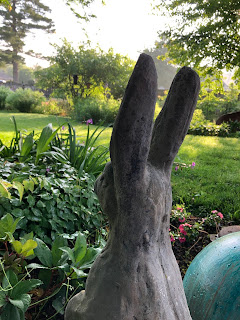 That's how long it was between the time I had planted every single plant I'd purchased or received to trial this spring and the time I bought two new perennials to plant.

That's right, I actually finished planting all the annual, perennial, shrub, and vegetable plants sometime late Tuesday evening. All of them. Every single one. I also finally sowed seeds for zinnias, marigolds, and sunflowers that evening.

It seems like almost a minor miracle to have planted everything, but what it really was was a lot of hard work and persistence. I set a goal to plant everything by early June,  and I met that goal.

Then I went on a garden tour yesterday which was followed by a big whoosh of wind and a thunderstorm that concluded with a rainbow. I appreciated the rain helping to nestle the plants out in the garden.

Those two new perennials I bought after 40 hours? They won't be in their pots for long. I'll plant them before sunset. After all, that bunny statue is watching my every move to make sure I do just that. So I will. Don't upset the bunnies! 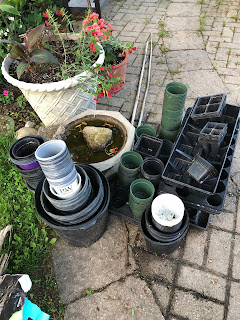 And all these pots? I'll recycle them all. 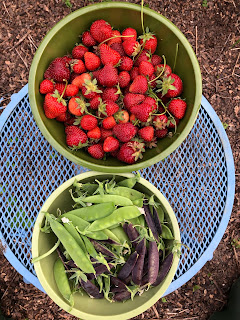 And in still other news, Dee and I recorded a podcast episode about roses, even though I don't grow that many roses, I still like to know about them, and so should you. Other tidbits in this episode include the story of how Dee and I met, in case you were wondering how a gardener in Indiana (that would be me) and a gardener in Oklahoma (that would be Dee) met, became friends, and decided to record a podcast together.

And if that doesn't convince you to listen to our podcast, how about listening to find out what Dee has in common with the Queen of England!

Later... I've got two perennials to plop in the ground!