When you don't know where to start weeding 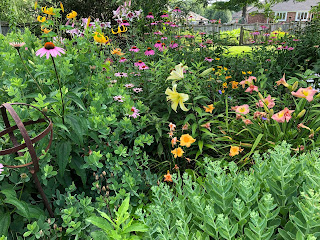 When you don't know where to start weeding because it seems there are weeds everywhere, where should you start?

I have the answer!

You should start with the bed or border where there are the fewest weeds.

Surprised? Did you think you should head straight for "weed central" and start there?  Well, if you did, hear me out as to why you should start where there are fewer weeds first.

First, if you start where there are fewer weeds and pull weeds in that area first, you help ensure that it doesn't become the next big "weediest" bed while you have your back turned and are working on the actual weediest area.

Second, what a great feeling of accomplishment you will have in a short amount of time when you've finished weeding the bed that was the least weedy (for the time being until more weeds arrive.) You can stand up, stretch, and take pride in the beautiful garden bed you've tended which for the time being is weed-free.

Oh, did you catch that little aside "for the time being until more weeds arrive"?  I speak only the truth that weeds will try to show up in that area again, but not for a while, hopefully. After you finish weeding a garden bed, you have time to plant—a few days, maybe a week or ten days if you are lucky— before the weeds show up again to take over any bare ground.

And with that time, you are going to move on to the next weediest bed. Not the weediest. We aren't there yet.

Yes, take each bed in order from least weedy to most weedy.  Eventually, bed by bed, weed by weed, you'll get your garden under control until you are finally left with the weediest, most horribly overridden by noxious weeds bed in your garden.

At this point you are an experienced weeder, having already successfully weeded other areas, and you are ready for the challenge of the weediest area of your garden.

Now you know not to let the weeds flower or if they are flowering, don't let them go to seed.

If all else fails and that weediest of weedy areas seems to be too much for you, you have options.

You can hire someone who is stronger to come and weed for you.

You dig out everything in that bed—yes, including those plants you actually planted there—and then solarize it with clear plastic sheets or cover it with a thick, I mean thick as in six inches, layer of arborist chips to smother and kill the weeds after you've cut them back and pulled what you can.

By the way, doing something like those last two options is the equivalent, in my opinion, of declaring bankruptcy. I would only do them as a last resort after all other weeding options have been considered and tried.

At this point, you have probably made two observations.

You observed that I did not mention grabbing an herbicide to kill the weeds. I gave up personally using herbicides several years ago. I'd rather just whack back weeks over and over before I grab a can of poison to kill them.

You also noticed that I assumed you have an array of weediness throughout your garden and that there is an area that's not too bad that you can reclaim as "garden" with some light weeding. While I certainly hope that is the case for most people, I understand that may not be the situation for a few.

If your garden is "nothing but weeds", see above for the bankruptcy options. But before you take such drastic measures, I suggest you try my "divide and conquer" method.  Find a starting point and measure out a roughly three feet by three feet area.  Mark it with sticks so you can focus on just that area. Then proceed to weed it until you've reclaimed it. Then move on to the next three feet section of garden. Repeat as many times as needed.

Or if you prefer, weed from tallest to shortest. Pull out the tallest weeds, then go back and get the next level, then return and get the ground huggers.

Whatever you do, don't try to weed everything at once. One weed at a time, one bed at a time, and eventually, you've reclaimed your garden.

Finally, when you've finished weeding a garden bed or border, finish it off with a nice crisp edge, to separate it from the lawn, if it is bordered by lawn. I make my edges as a V-shaped cut. Maybe top dress the bed with a little mulch or compost. Then stand up, step back, and admire it. Pat yourself on the back. You did that. You created that beautiful little garden spot.

Reward yourself with a big drink of water and move on to the next garden bed.

That's how you start, and finish, weeding a garden.