Figuring on Pawpaws, Pawing my Figs 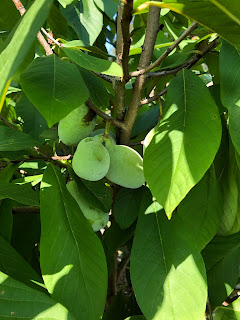 My apologies for the title of this blog post.

Sometimes, I can't help myself.

Sometimes, I blame the garden fairies.

Sometimes, I'm overly excited by the number of pawpaws on my pawpaw trees and the number of figs on my fig trees, which are actually more like oversized shrubs.

This time, I'm excited because I think the pawpaw stealing raccoons are gone and I may finally get to eat some pawpaws in another month or so.

How do I know the raccoons are gone?

This summer, I managed to grow some sweet corn nearby and harvest a dozen or so ears out of my little patch, without sacrificing any of it to the raccoon gods.

In fact, I haven't seen any raccoons or their scat this summer.

I would say that not seeing any raccoons or their scat, along with the success of my sweet corn harvest, is evidence that they've moved on, except—and there is always an except—my neighbor says he has seen raccoons in his yard this summer.

How is my sweet corn harvest evidence? It is evidence because normally if raccoons are around, they harvest the sweet corn for themselves the night before the day I've chosen to pick it. They generally take it all for themselves too.

This year, they didn't take any.

But I still remain on high-alert to watch over my pawpaws until they are ripe and ready for me to harvest and eat. This year may be, WILL BE, the year I finally get to taste a pawpaw. This year, unlike the last two years, the raccoons will not get to them first.

Moving on to the figs...

I have two fig tree/shrubs. Both are huge. Both have baby figs. 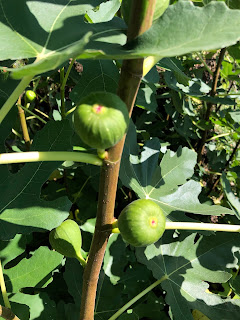 I'm figuring that at least a few of the figs will ripen before the first frost, which could be, hopefully will be, sometime not sooner than early October.

Figs are not native to Indiana like pawpaws so I also hope that the raccoons, which I am pretending are gone, won't know what the figs are and will, therefore, leave them alone.

Hope springs eternal in a garden in spite of evidence to the contrary, which some people like to call common sense.

Anyway, I am figuring on pawpaws this fall, and pawing my figs waiting for them to ripen.