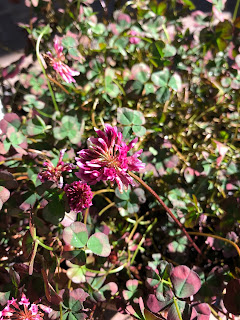 We are garden fairies and we have been debating whether or not Carol has lost her mind.

We are divided on this and decided we would post here so people could weigh in.

Some of us, and we won't say which some of us as we do not want to unduly influence anyone's opinions, think Carol has lost her mind because she brought home a new clover called Trifolium repens 'Coco Mint'. (See picture.)

Oh yes, it is that Trifolium repens, which is more commonly known as Dutch white clover, which Carol has growing in her lawn, except this new one has pink flowers and red variegated leaves.

And this is not the first clover she's brought home.

A few years ago, she brought home Trifolium repens 'Green Glow' which we think she is growing in a far too shady location. 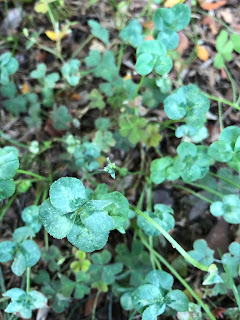 But we are garden fairies, what do we know?

We know this clover has lots of four-leaf clovers on it, as does 'Coco Mint'.

And now Carol is looking all over the web for other varieties of clover.

It sounds a little less ridiculous if we use the botanical name, doesn't it?

Anyway, we think Carol has this big idea to buy as many varieties of Trifolium repens as she can so she can call it a collection.

The reason she wants a collection is because she watches too many British gardening shows where they visit people who have collections of plants of a particular genus.

So there's our case for Carol having lost her mind.  She's fallen into a rabbit hole of clover—excuse us, Trifolium repens—and she's not climbing out of that hole until she has all the varieties she can possibly find.

Which is about six, as far as we can tell.

Not much of a collection, if you ask us.

Anyway, we are garden fairies.  We have run out of time so we will not be able to present the other side of the debate, that this is a perfectly natural, sane thing for a gardener to do. Even though, clearly there isn't much to say in her defense.