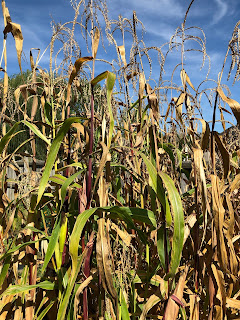 We are garden fairies and we do not know what to make of this weather so we decided we would discuss it.

First of all, there hasn't been any rain since we don't remember when. Sure, there were a few showers earlier today but they were just a spit. Hardly worth mentioning.

Floof Flutterfly commented on how hot it has been and how she remembers sometimes it at the end of September it would be quite cool.  So cool, we needed coats.

And if we didn't have a coat when we should have had a coat, well Trilby would get all mad at us and tell us we were going to catch colds.

But we never did.

We are garden fairies!

We would like to know how Trilby got her name. Carol named her that. Muttered something about a teacher she had in school and she never knew her first name but then she found out her first name  recently and this teacher apparently was kind of strict about wearing the right kind of coat for the weather and she scared little Carol a few times but that was a long time ago, well more than fifty years ago so we wonder how or why Carol even figured out her second grade teacher's first name.

Honestly, we think this post was just so Carol could call a mean garden fairy Trilby and also introduce the name Floof Flutterfly, which she made up.

We simply will not be used in this way. We are far too busy working out our plans for fall, which include frost, but we aren't saying when. We also have thousands if not millions of leaves to color and did we mention how lazy Carol is? She bought pansies ages ago and hasn't potted them up yet.  Honestly, what does she do with her time? Seedy and Soddy are going to try some tricks tomorrow to get her working on those

We are garden fairies!

Violet GreenPea MayDreams, chief scribe for the garden fairies who is also a little bit afraid of Trilby who, though she has a hang up related to wearing the right kind of coat, also encouraged her students to write stories, which Carol loved to do.  Carol made up this one story... well, we are garden fairies, we aren't at liberty to tell other people's stories without their permission!