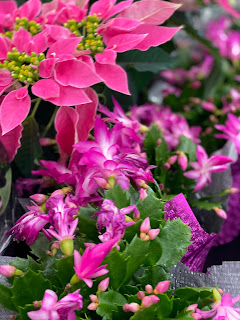 We are garden fairies and we wanted to point out that stores are starting to stock Christmas plants earlier and earlier.

We would like to point out that according to the rules we have just made up about buying plants for Christmas, you should not be buying poinsettias this early in the season. It isn't even Thanksgiving yet, what are you thinking?

However, after much debate and discussion, we have agreed that it is acceptable to purchase Thanksgiving Cactus at this time, which is the flower in the lower part of the picture.

We are garden fairies and we are going to ignore the fact that most people look at Thanksgiving Cacti and think of them as Christmas Cacti.  It is not a Christmas Cactus, which is why we've agreed it is okay to purchase it now.

We are generally thought to be unhelpful garden fairies,  so we are going to go with our reputation and we aren't even going to explain the differences between Thanksgiving Cacti and Christmas Cacti but just will let it be known that almost every single one of those types of plants you buy between now and Christmas will be most likely 99% assuredly a Thanksgiving Cactus.

But in general, we are not going to stop anyone from buying any plants because 'tis the season and any plants is better than no plants. Anytime.

Just ask Granny Gus McGarden who is fit to be tied because the fig trees are outside in the Vegetable Garden Cathedral without protection on their roots and it is going to get as cold as it has ever gotten this time of year but the good news is that we might see some snow too. The figs are, of course, planted in the ground, not in containers, which is why they are outside and will remain outside for the winter.

We garden fairies have elected Seedy and Soddy to watch over them and do their best to protect the figs until such time as Carol decides to provide adequate winter protection.

In the meantime, we are quite excited to be planning a birthday party for The Christmas Cottontail which is going to have its first birthday anniversary of being published on November 16th. 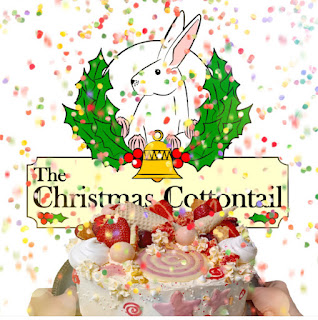 In honor of this momentous occasion, we garden fairies are planning all manner of shenanigans this week and some of them will be a surprise.

What is not a surprise is we talked Carol into setting up a code on her online store that removes the shipping if you order books by November 30th.  We aren't blatting this code out to just anyone but we are telling you the code is BIRTHDAY.

We are garden fairies. We have other secrets. Check back later to see if we post any of them on this blog.