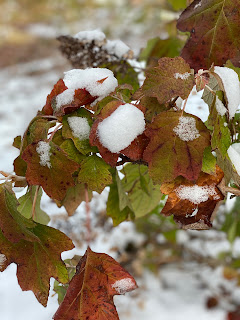 The Christmas Cottontail nervously looked at the calendar hanging on the wall above his potting bench.

"Ah yes, November 13th," he said to the underbunnies and chipmunks. "Christmas seems so far away but it is only 41 days from now. We've got a lot to do between now and then."

Everyone nodded in agreement as the Christmas Cottontail handed out a list of the day's assignments and checked his own schedule. Then he picked up the latest newspaper delivered that morning by one of Santa's elves.

"What's this?" he said as he pointed at the weather news in the North Pole News and Such. Why is it so cold and snowy so early?"

And even though his question was rhetorical, everyone stopped their work—which in truth they had just barely started—and offered their ideas.

"I think it is because people are putting up Christmas decorations too early," said Ursula Underbunny.   And everyone nodded in agreement.

"Well, whatever the reason, if it doesn't warm up so they can finish their fall clean up, a lot of gardeners are going to have some messy gardens for me to visit when I ride with Santa on Christmas Eve. And I can't possibly plant any seeds or bulbs for spring flowers in messy gardens. Wouldn't be right!"

Just then, Chase Chipmunk handed the Christmas Cottontail a list of some of the messiest gardens they were aware of.

"Well, look at that. It figures May Dreams Gardens would be on the top of this list of messy gardens! Does Carol have any excuses for herself? Or should I ask what's her excuse this year?" asked the Christmas Cottontail.

"Just one excuse this year," replied Chase. "It seems she broke a little bone in her foot and so she isn't allowed to mow."

"Is that true?" asked the Christmas Cottontail.

The little garden fairy came up from under the potting bench again and piped in, "It seems it is true, according to reports we are getting from the garden fairies there. But please, Christmas Cottontail, have pity on her. She reportedly has some people coming next week, when it hopefully warms up, to help her with the last of the garden clean up. I think by Christmas, her garden will be in good shape and you'll be able to plant lots of seeds and bulbs for spring flowers there. Don't take her off your list of good gardeners just yet!"

"Okay, she stays on the list, for now," said the Christmas Cottontail.  "In fact, let's put everyone who has had a colder, snowier November than usual on a special list and make sure they get lots of spring flowers, regardless of how messy their gardens are. They're sure going to need them if this early snow is any indication of the kind of winter they can expect."

With that decree, the underbunnies and chipmunks proceeded to update all the lists to ensure any gardener who had snow in November would get an extra allotment of spring flowers when the Christmas Cottontail visited their gardens on Christmas Eve.

Then much relieved and excited by the prospect of more spring flowers, everyone went back to work to prepare the bulbs and seeds the Christmas Cottontail would be taking with him once again on his Christmas Eve journey with Santa. 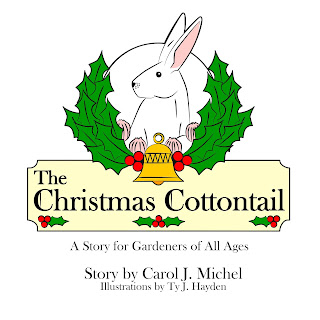 Teresa Byington said…
Thanks for keeping us in the loop. My Bloom Thyme garden has not been put to bed properly this year as the gardener had a bit too much on her calendar. Hoping for some warm days to get a bit more done. As I prepare to go to England for Christmas, I bought a copy of the Christmas Cottontail. I so look forward to reading it to my grandsons. Know this, when I read this book I hear it in your voice. I am wondering is I will sound like you when I read it to them. HAHA.
Thu Nov 14, 09:21:00 AM 2019

MissPat said…
I, too, am thankful (it is November after all) for this reprieve, although the forecast shows only slight moderation before another shot of deep freeze.
Thu Nov 14, 09:34:00 AM 2019

Lisa at Greenbow said…
I am glad this crazy November is getting the attention it deserves. Let us all know that this too shall pass.
Sat Nov 16, 06:51:00 AM 2019