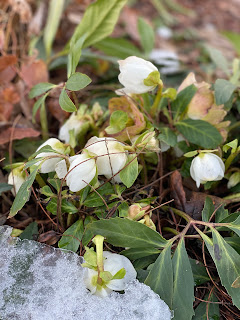 "Which gate will he come through?"

The old rabbit—Nineteen—looked to each side of the garden at the gates, wondering which one the new year rabbit would hop through.

"Will it be the east gate?"  He liked that gate. It lead past a big hydrangea, still loaded down with dried flowers from the summertime, across a little puddle of lawn, and straight down a path through several gardens, eventually ending by the vegetable garden.

"Or will it be the west gate?" He thought about how that gate lead you right to a flower bed, which then forced you to turn toward the house and patio. It was a good gate, too.

"Or maybe he'll use that gate that hardly gets used at all."  That gate lead straight into the vegetable garden from a neighbor's yard.

"I suppose it doesn't really matter," he mused. "As long as he gets here on time, we can sort out where  to go from there."

Of course, Nineteen knew he wouldn't be there to sort it out for Twenty, expected to arrive within hours. His bags were packed and he was heading off to The Past to meet up with all the others who had gone before.

As all the others had done, he reviewed his list of reminders and checked his watch.  Just a few more hours left!

And what was on his list? And did it matter to Twenty? After all, he remembered his first days. He didn't really look at the list left for him. No. He decided to just clean up what he could and hope for the best.

Still, he didn't fight the urge to make a list. He checked it again. He wrote down that Carol really needed to take the garden up a notch with Twenty, maybe even hire some help to do it.  He made note that he hadn't pulled as many weeds as he would have liked to but knew they didn't need to see that in writing. They could just tell by looking at the garden.

But he was happy with the new plants he had added to the garden.  There weren't too many but they were good ones.

And he hoped that the weather was good in the new year. He was kind of proud of the weather over the past year, though he did regret botching up Halloween. Hopefully, the good weather on Easter made up for it because that was the day that really mattered to Carol.

Tick-tock. His watch's ticking was getting louder as midnight approached.  Suddenly, just as he heard the chimes from the nearby church tower, he saw both gates opening. Looking from one to the other he realized that not only was a new year heading in, but also a new decade. They used both gates! And then the back gate opened to let in that extra leap day.

"Wow," he said as he tipped his hat to Twenty and The Twenties. "You two are going to make things quite interesting!  I made a list..." Then the clock struck again reminding his time was up before he could finish his sentence.

And with the final chime of the clock at midnight, Twenty and The Twenties hopped in as Nineteen hopped out shouting, "Happy New Year and Auld Lang Syne and all that." Then he disappeared into The Past.

Looking around, Twenty and The Twenties exclaimed together, "Goodness, we have our work cut out for us, but with Leap Day's help, I'm sure this is going to be the Best Garden Year yet."

Nodding their heads in agreement, they started to make their plans...