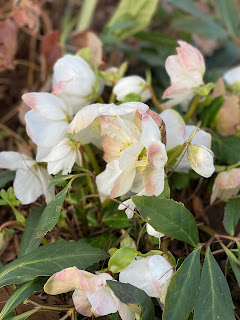 I like how these flowers fade. They add a little color as they head off into the sunset of their season.  Helleborus niger. The Christmas Rose.

By now, most of us have put away our Christmas and holiday decorations. I have, though I do still have poinsettias and amaryllis bulbs blooming here and there.

My method for getting rid of the poinsettias is to just stop watering them. After a while, they drop enough leaves to remind me that I did indeed stop watering them. Then I feel justified in tossing them with little ceremony on the top of the frozen compost pile because they've become a bit messy with their dried up leaves all over the table.

This year so far the compost pile isn't frozen solid since we've had mostly mild days this winter. Some of the days have been mild enough for me to actually feel guilty for not getting out into the garden to putter around a bit, which at this time of year would include pulling out winter weeds and cutting back perennials.

One day last week it was so mild, I actually did go out into the garden where I cut back some grasses and old butterfly bush stems. They weren't providing all that much winter interest.

It felt good to be outside. I should take the opportunity to go outside whenever we have mild days.

A few days ago, on January 2nd, I ventured out into the garden just to look around and I spotted a snowdrop in bloom. Galanthus. 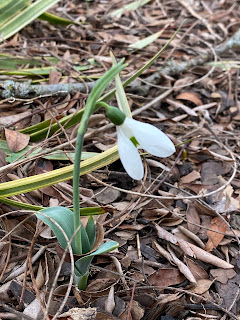 I like how this flower—it is the only one—took advantage of the mild weather to come up and bloom.

I can contrast it with some snowdrops I am forcing in a pot, or at least attempting to force in a pot. 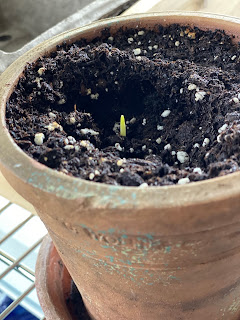 This is an experiment. I found some snowdrop bulbs on clearance at a big box store late last fall and decided to buy them and pot them up. After I potted them up, I put them in a bag in the back of the refrigerator, where they remained with the hyacinth bulbs until I pulled them out on January 1 to see if they had done anything.

So far, they have done enough to produce one tiny little sprout.  We will check them in the days ahead to see what further progress they make.

We will also check progress on my fourth book of humorous gardening essays which I sent off to be final edited today. I'm calling this one Creatures and Critters: Guests in My Garden.  If all goes according to plan and schedule, we should be publishing this one in late winter/early spring.

Kathy said…
Looking at the leaves on your snowdrop, I think it is Galanthus elwesii, the giant snowdrop. There are variants of it that are considered "fall-blooming," so maybe yours is one of those natural variants, encouraged by your mild winter.
Mon Jan 06, 07:55:00 PM 2020

mama celoni said…
Congratulations on sending the book off. Like sending your baby to kindergarten. Trusting them to someone else. But such a relief you kind of want to kick up your heels. Go kick up your heels😉
Peace
Lin
Hi the the garden fairies. Hope they are in a cozy spot.
Mon Jan 06, 11:14:00 PM 2020