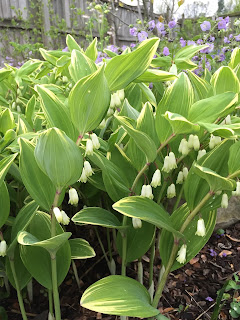 I like digging into the topics that Dee Nash and I discuss on our weekly podcast episodes of The Gardenangelists.

Last week, we decided our flower would be Solomon's Seal. Great! A native wildflower! Perfect!

Well, not so fast.

I did a little checking and found that indeed, there is a native Solomon's Seal,  Polygonatum biflorum,  which is usually found in wooded areas in the Eastern United States. I bet I saw it once or twice when I was a kid and we'd go to a woods to hunt for mushrooms.

I also found out from Dee that the flowers of Solomon's Seal are prized by queen bumblebees. In fact, Dee found where a queen bumblebee had made a nest near some Solomon Seal growing under an oak tree in her shade garden. She's not worried about her queen bee, though, because she won't hurt anyone.

Good to know. Now I'll look for a queen bumblebee around my little patch of Solomon's Seal.

I also learned that my patch of Solomon's Seal isn't the native P. biflorum. Nope. It is more likely Polygonatum odoratum var. pluriflorum 'Variegatum', native to parts of Europe and Asia. And same is true of the dwarf Solomon's Seal I have in another part of the garden.  It is probably Polygonatum humile, also from Asia. Though don't quote me on either name because I need to find the plant tags to verify them.

Speaking of finding the tags, I've been going through all my old plant labels and tags (and seeds) and filming these sorting sessions to post on YouTube. I've done 12 sessions so far and probably have enough labels to go on for another 12 sessions. I set a timer so each episode is about 12 minutes long.  They are a nice walk down memory lane. And sometimes they just show how much we forget over time. Click on that link and watch for yourself!

And we think our family trees are complicated!

Anyway, all that to say if you want to plant Solomon's Seal in your native wildflower garden, look for P. biflorum which is actually native to the United States. Put in a wooded setting and keep it watered until it gets established. Then watch it grow. It can be aggressive and take over when it grows where it is happy, as some plants do.

Now, go and enjoy some other wildflower related posts at Clay and Limestone with our Wildflower Wednesday host, Gail!