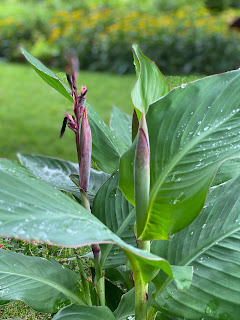 I have a secret and I've left it in plain sight on my back patio. And part of the secret is on the stoop outside the garage side door.
My secret is that I still have at least 15 bags of mulch that I bought and had delivered in April (April!) that I haven't spread around in the garden.
Whew. It feels good to tell my secret to someone. To get it out in the open even though it's been out in the open on the patio for several months.
Thank you for letting me share it with you. For allowing me to unburden myself.
I suppose not spreading these bags of mulch would be okay if they were leftover bags of mulch and I had properly mulched everything early in the season. Then I suppose I could just claim that I didn't do a good job of calculating how much mulch I needed. It happens.
Or I could insist I ordered extra bags to have on hand because I had the bags delivered and it didn't change the delivery fee to throw in those extra bags. A gardener needs to be prepared with a little stockpile of mulch!
But neither is the truth.
The truth is I just haven't gotten around to spreading that mulch.
I have mulch guilt.
Even though I've actually spread about 20 bags of mulch so far.
I still have mulch guilt.
It's those darn leftover bags that are still making me feel guilty.
It all reminds me of a J. R. R. Tolkien quote from The Lord of the Rings, "It's the job that's never started as takes the longest to finish."
Or in my case, the job that's been stopped and not re-started.
The only way to get rid of the guilt is to re-start the work I started and spread that mulch.
Let's see.... if I commit to spreading two bags of mulch a day, I should be done in about eight days. Of course, I said that same thing the last week of June, only then it was three bags a day and all the mulch would be spread by July 1st. Then on July 1st, it was a bag a day and it would be done by mid-July.
Now it is four or five bags a day every day for the rest of this week and it should be finished off by August 1st.
Good grief, how could we have so few days left in July?  And I'm still dealing with all this mulch guilt!
Well, now that I've confessed my secret to everyone, I better get busy and spread that mulch, make amends to my garden, and reclaim my patio, or who knows what those pesky garden fairies might do (and post about!)
humor real gardeners