I rescued the zinnias from the evil clutches of the weeds and for now, peace reigns in the garden.

And it is lovely.

Honestly, these are the best zinnias I've ever grown.

There are zinnias in all colors, except blue and purple. I don't think zinnias come in purple and they definitely aren't any blue zinnias.

Some of the zinnias are over four feet tall!

And from where I'm looking, there doesn't seem to be much powderly mildew on them. 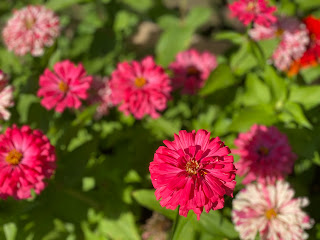 While I was admiring the zinnias, an Eastern Tiger Swallowtail showed up and said, "Excuse me while I eat some nectar here."

Of course I replied that I would not stand in his way of feasting a bit. 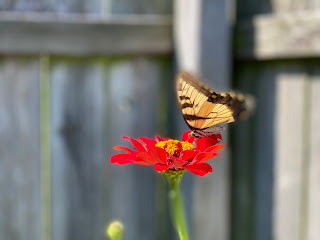 Though I did take advantage of his presence to make a video of him flitting from one zinnia to another.

I think watching this video is a relaxing way to spend a minute and 40 seconds. Tell me I'm wrong! You can't because you know it is relaxing to watch butterflies.

Update:  I buy lots of zinnia seeds from Renee's Garden Seeds, Botanical Interests Seeds, and Burpee. Look for the tallest varieties which are best started from seed sown directly in the garden after all danger of frost has passed in the spring.

This week's episode of The Gardenangelists offers a little Shakespeare for your garden. Just a little. We do not talk about zinnias in this episode but we do in other episodes. If you listen to one of them, you will find that I pronounce zinnias as "zeen-yahs." I don't know why. Just how I learned it as a kid, I guess. I'm trying to do better and say "zin-e-ahs" but I have to think about it before I say it.

Over on my author website, I have a separate blog where I occasionally post about writing or something non-gardeny. It has a separate RSS feed, if you are interested (sign up is at the bottom of the home page). This week, I posted about my absence from social media.