Beware of the Big, Woody Vines 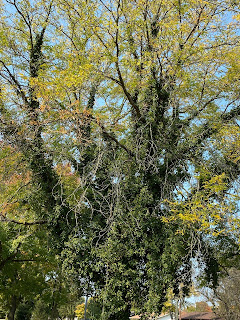 The big mass of green growing up through this large tree is a giant bittersweet vine.

Fortunately, this large vine on this large tree is not my problem. It is near my neighborhood and I see it on my daily walk.

I know it is a bittersweet vine and for most of the summer and early fall, I assumed it was the Asian bittersweet, Celastrus orbiculatus, a big take-charge kind of vine that one should never plant because it is invasive.

But there is also a native bittersweet, Celastrus scandens, which goes by the common name American bittersweet.

The primary difference is that the flowers are at the end of the stem on the American bittersweet and show up in the leaf axils on the Asian bittersweet.

Yesterday, I decided to take a closer look at this bittersweet, and I got close enough to take a zoomed in picture of the fruits, which are now forming. 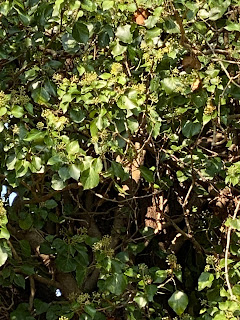 Shall we get a little closer? 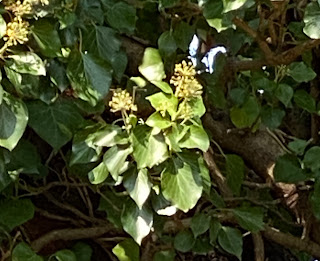 Yes, it looks like those little fruiting things are forming at the terminal end of the stems which means this big huge, messy looking vine is probably an American bittersweet.

Now what? I thought this was an invasive vine, not I think that it is a native vine which leads to one conclusion...

Big woody vines, whether native or introduced are big, woody vines and one should think long and hard before planting them in your garden.  They are what I call an "advanced plant" meaning that one should be both careful and deliberate when planting them because they can take over a garden or a tree in just a season or two.

Plus, if you are growing bittersweet so you can have stems of the orange berries to cut off for fall decorations, you actually need TWO of these vines because it is dioecious, with male flowers on one plant, female flowers on another plant.

Now just where are you going to put two massive big woody vines like that?

Most of us don't have that kind of garden space!

Anyway, I learned something new by taking a closer look and by doing a little bit of homework and research. That's good. We should all do more of that these days.

And I don't have any big, woody vines in my garden, which is also good.

BUT because of that big vine near my neighborhood, I occasionally find seedlings of bittersweet here and there in my garden because the birds love those berries, eat them, then fly over to my garden and poo out the seeds which then send down roots and get themselves somewhat well-established before sending up a stem, which I eventually find and then pull out. But always a little root remains to re-sprout so I pull those bittersweets out of the same three spots all the time.

All this reminds me to go out today to check those three spots and see if the bittersweets have resprouted.

If you'd like to hear more about big, woody vines, Dee and I discuss them on this week's podcast episode of The Gardenangelists and provide some other timely gardening advice too.

What Lucy and Ethel and Laverne and Shirley brought to sitcoms, Carol and Dee bring to the world of podcasts with their informative, often humorous take on gardening. Listen every week to The Gardenangelists to find out what Carol and Dee are up to in their own gardens as they discuss flowers, veggies, and all the best dirt.